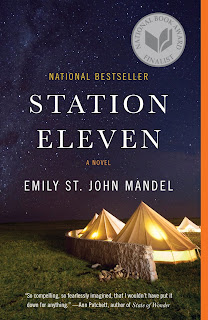 I'm not sure how Station Eleven got on my "to read" list of books. I can imagine it's popularity as it's another post-apocalyptic similar to the uber popular The Handmaid's Tale and the strong reviews on Amazon probably helped. Like The Handmaid's Tale (my review here), I didn't really enjoy the story with both earning only 2.5 stars. Let's find out why.

While the novel has an interesting concept, it's beginning to become so cliche in the modern storytelling concept. I'm sure you've seen it before. It's the common, sometimes well used and sometimes over used, practice of telling a story, in this case with multiple characters, on two different timelines. As you guess from the introduction, the author goes between the pre and post apocalyptic world, taking the characters and showing their lives at different points of time.

Overall, the characters are interesting. They are a varied in background and Mandel does a good job of rounding them out over the course of the novel. I personally did not find much of a connection with any of them, and while she tried to make a couple of them likeable and interesting, I struggled to find a reason to root for them.

The novel has a nice pace, moving backwards and forwards on the timeline with ease. I enjoyed the action scenes and the constant feel that something exciting would occur at any moment. Part of the excitement of the novel was knowing that you didn't quite know where it would end up. Unfortunately, that was also one of the major limitations. I thought that there would be a much greater climax for an ending.

Perhaps my biggest frustration with the novel is what I alluded to above - I couldn't find a reason to care for or connect with the characters. While I really liked the general arc of the book, the characters, though well described, didn't make a mark on me. I presume the other reason I may not like the book, is perhaps the same reason for the low rating of The Handmaind's Tale; I don't enjoy reading sad literature. When the beginning of the book is killing of a significantly large percentage of the world's population, I usually find this type of story harder to engage.

Clearly I did not enjoy this book as many others that have read it. While it has some interesting elements, good action, and a plot that does keep you engaged, it struggles to create characters to root and care for and presents a pessimistic view of a post-apocalyptic. Perhaps it ends up being a more enjoyable read for you!
Posted by droth8um at 4:36 PM No comments: 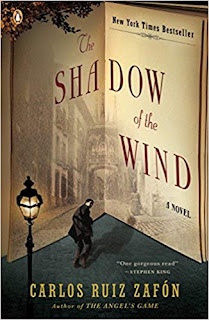 I can't remember how The Shadow of the Wind got on my list of books to read, but I'm certainly happy it did! It's only about ten years old, but it's a superb read.

Quick synopsis -it's a book about a book. Cool, right? Even cooler, this book, The Shadow of the Wind, is about a young boy who turns in to a young man but reads a book, in this book, titled The Shadow of the Wind by a different author (one of the most mysterious characters in this book). It then follows him as he works through the remainder of the novel (the novel sometimes going backwards historically) to figure out the mystery of this book and those surrounded by it.

I really fell in love with this novel. It was one of those, that as I was nearing the end, felt regretful for not having taken it in more slowly. I wish I would have taken more care of each page. It's odd how I got to that place. I certainly felt confused for parts of the novel; other parts, a bit bored or under engaged. But, I realized upon finishing, that I was really in the midst of the piece of art that was being finished. It was not a finished piece, and I was only looking at the pieces individually, which made less sense than seeing them (as I did at the end) as a whole.

So, why did I love it so much? Well, there were many aspects. First, the setting -- mid-19th century Barcelona. Both a place and time that I was a bit unfamiliar. By the end, the author had me thinking about planning a trip to Spain to see so many places that he detailed so delicately (and, from what I can tell, accurately). Second, the book was such a lovely mix of different ideas/themes. It was part coming of age novel, part love story, and part mystery. What was cool, was that each of these areas, shined at different parts. As I got to the last 100 pages, all three of these story lines came into focus. And, as I progressed through the last quarter of the book, each of these themes began pulling stronger and stronger as being the predominant idea of the novel. Beautifully, there was no winner.

What I think was most remarkable about this book was that it simply was an incredibly well told, original, and thoughtful story. It really felt like it was part fantasy or magic, yet all of it was based in reality (though fictional). Really, one of the most enjoyable books I've read of late. I highly recommend!