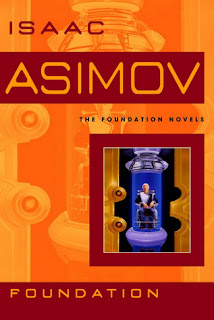 As you can probably tell from most of the books I read, I'm not a big fan of science faction (or worst yet, fantasy). In fact, I've only read a few in the nearly decade I've blogged about books. In that time, one of the best books I ever read was science fiction,  the 5 star Childhood's End. Nonetheless, I avoid most of these types of books knowing I don't love the genre and know that most will not be nearly as good as Childhood's End. However, I had heard for a while that Asimov's Foundation was on the same level. And, for about 3/4ths of this book, it was, then things turned a bit south.

To begin, this book has lots of similarities to Childhood's End. Both were written many years ago (Foundation was 1951), both take place in the future, both are relatively short, both have great dialogue and interesting characters, both jump over large chunks of time, and both are really political dramas mixed with science fiction. Actually, that last element is probably what I like most about both books. While they do describe a future society that is certainly "fictional", this book is really a struggle about world domination and political power.

As I alluded to in the first paragraph, I found the first 75% of this book phenomenal, 5 star level. It was a crisp and exhilarating read that I could not put down. The premise was fantastic and maybe the most influential character only lasted for a few pages, though his legacy seemed to last a millennium.  As the book continued after its fast start, it was a pleasure to try to keep up with. Asimov also did a superb job bringing up a new story line right as the previous one was getting stale; truly, his timing was perfect.

Then, as the novel was getting to it's close, things slowed down. The text wasn't as crisp. The new characters didn't make quite as much sense. The connections and lines from the beginning of the novel weren't tied as closely and the reader began to get a bit more confused and bored. Don't get me wrong, the last quarter still shines and the story line is nearly as good as the majority of the story just not quite as good. As I finished up, I actually wonder if Asimov knew at that point that this would be a trilogy (that eventually turned in 7 books, I believe) and slowed the story down.

Overall, this is a great read. Other than the slow down a bit at the end, it's an exciting and exhilarating story told be a master storyteller. If you have any interest in classic (or modern) science fiction and/or liked Childhood's End, I strongly urge you to read this novel. There is a good chance you will not regret your decision.
Posted by droth8um at 8:19 AM No comments: 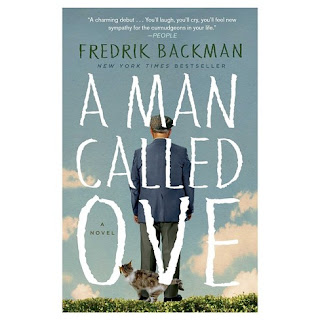 Apparently, A Man Called Ove is one of the more beloved books in the last few years. I mean, just check out that impressive 4.5 star rating with over 16,000 views. People love this thing! So, what's wrong with all of them and what is right  with my 1.5 star rating? 😊 Read further to find out.

So, actually, we're all right. I mean, its a book and people all have their own opinion of what is enjoyable and entertaining to them. Clearly, this one was neither for me. I knew the premise before I started, curmudgeonly old man melts your heart with his external rudeness but internal kindness. I think I liked it better when I saw it the first time in Disney's Up!

I really did have to check myself after finishing. How is it possible that this book is so well liked by others and so disliked by me? Did I not get that under Ove's tough exterior is this super sweet guy who cares for others? No, I got that. Perhaps I missed this books message that no matter how tough life is, you can still find meaning, and yes, even love later on. Figured that as well. So what is it about this book that others find so mesmerizing? I really do think it's Ove.

But here is where they are wrong; everyone's overthinking it. Everyone is looking so deeply into his character and drawing conclusions that you have to work to get to and missing what is right in front your face - this guy is a huge JERK! I mean, really, he is a miserable, awful human being who enforces rules, is incredibly rude to others, and has unbelievably pessimistic view about the world and people! He is not endearing; he is just an a&*hole!

What I think also did this book in, at least to me, as that the story really is quite boring. The events that occur are so menial; his past so expected. Yes, I get it, it's real life; but guess what, real life is boring. I read for entertainment and excitement. This book had neither.

I also think I just have a philosophical disposition that is opposite Ove.  He seems to not enjoy life; he seems angry with most people; he seems to be frustrated a lot... you get the idea. Why live life that way? Worst, why spend time in real life (like I did) reading about a person with this view of life for 300 pages? Well, my recommendation to you is don't do that. Sure, 16,000 people might be right. However, if you want to be entertained with an awesome and exciting story about a well-rounded and optimistic character this is NOT the book for you. If you want the exact opposite, read ahead!
Posted by droth8um at 1:35 PM No comments: