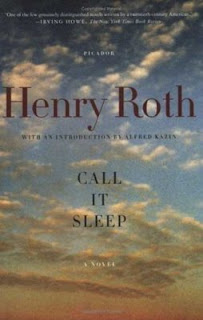 Like me, you probably have never heard of this novel. I was recently flipping through a book that included the best pieces of American literature even written, and this novel was included. In the critical evaluation included, the critic stated that it is one of the most underrated books of the past century and is a "classic". Well that, along with the author being my namesake, was enough for me to check it out.

Call It Sleep was written by Henry Roth (no relation) over 70 years ago. It tells the story of a young boy (between 6-8 years old over the course of the novel) who is growing up in New York in the early 1900s. He is a Jewish immigrant, and the novels basic story is a retelling of parts of his daily life. In the critique I mentioned earlier, it was stated that this novel is the preeminent story about Jewish immigrant life in America. I cannot disagree.

Although I had some issues with this novel, there is no disagreement that this novel eloquently and accurately tells the story of immigrant life. Roth beautifully makes the reader see, feel, hear, and taste all aspects of immigrant life during this period (by the way, shocking -- immigrant life is HARD). The story is nicely written, and the description and detail of ordinary things is as good as anything else I have ever read. The plot, although a bit slow, tells a fairly interesting story and includes a solid ending which helps save the novel a bit as it grows dull at some points.

There were some problems I had with the novel though. First, it was written about 70 years ago and, in my opinion, many of the books from that time and earlier do not have the same pace as modern books. Each chapter does not finish with a big mystery that pushes you on and there is not constant action and excitement. Normally I would not care, but this book was very slow and there were pages of description with nothing really occurring.

One of the more frustrating, yet kind of cool parts of the book, was that whenever the main character was speaking to other kids his age, his dialogue was written as that of a child and recent immigrant. This made it extremely difficult to get through much of the dialogue as it took a great deal of effort to actually sound out what was said to understand. Here is an example " It c'n catch rats, dot's wot yuh do wit' it. See dis little door? De rat gizz in like dot." It may seem easy to understand but when this goes on for 400 pages, it can get difficult. However, it made the characters seem more real and helped the reader to better identify with being a young child at that time in New York.

Overall, the story and characters by themselves are nothing great. However, the writing and descriptions of immigrant life are incredibly well done and that is the real value of the novel. I would recommend this novel to anyone who has any interesting in early Jewish immigrant life or immigrant life in New York at the beginning of the past century. 3 stars.
Posted by droth8um at 8:44 AM No comments: 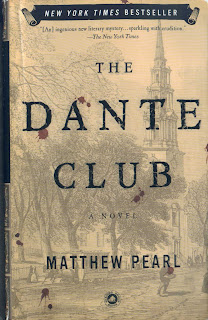 I have had this book on my list to read for a couple of years now. Historical fictions interests me, and the premise that poets James Russell Lowell, Henry Wadsworth Longfellow, and Oliver Wendell Holmes are translating Dante's Inferno while a serial killer is lurking through Cambridge sounds interesting. Unfortunately for me (I read the whole wretched book), the The Dante Club was less than stellar and struggled in a number of ways.

This may sound like an odd complaint but the book was far too slow while going too quick at the same time. Let me explain. Overall, from start until end, the book is very slow. Scenes develop at a snails pace and the whole plot could have been condensed into a couple hundred pages (it's pushing 400). However, Pearl also glosses over and quickly moves past some of the more interesting and worthwhile parts. He seemed to belabor the most boring of points and fly past anything that was worthwhile. He would constantly describe too much of the prosaic and not enough of the interesting.

There were some good moments... I felt like I really got to know the main characters and their wit and jovial attitudes made me like them more as the novel moved on. It was a decent mystery, and I certainly couldn't figure out who the killer was until the author nearly spelled it out. It was also nice to read about the poets mentioned earlier. I have read briefly about them in a far better book called The Metaphysical Club, and it was interesting to read about them in a fictional context.

Overall, the book received 2.5 stars, and I would not recommend it unless you really appreciate listless, languid writing in which the author take 25 words to describe something that could take five words. The story itself is fairly interesting and takes place right after the Civil War. If you do like it, let me know why. I think it won some awards, and I always appreciate others views on books I dislike (or like for that matter).
Posted by droth8um at 1:55 PM No comments: