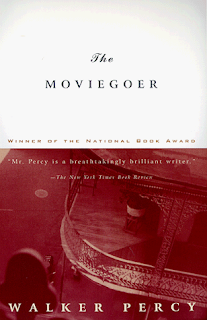 Rare is it that one can get through a novel, save the last twenty pages, really not enjoy it, finish the last twenty pages, and then have a totally different view; somehow that's what happened as I finished Walker Percy's The Moviegoer. Bizarrely, I really disliked this book for much of my reading of it, but a final flurry of fascinating writing and a great final chapter elevated this book from a persumptive 1 or 2 stars to a solid 3 star novel.

The Moviegoer, written in the 1960s, was not on my book radar at all, but it was recently recommended as a favorite of someone so I thought I'd give it a whirl. As I began reading it, it reminded me so much of another recent book I read, American Pastoral. There were some distinct similarities: both books are incredibly well written with great prose, both books revolve around a central male character who is a bit 'lost', and in both books nothing really happens. As I explained in my Pastoral review, I like things to happen. Don't get me wrong, I appreciate a novel about philosophy of life and metaphysics but those things need to be overt. Those concepts were not in the Moviegoer until the end; but alas that saved the novel.

The book is really about a guy who is living in New Orleans after World War II. He is about 30, successful, wealthy, no real problems yet there is a 'malaise' as he would like to say about his life and his world. Think Holden Caulfield without the craziness. Then he just talks about his daily life. The key to all of his seemingly innocuous stories doesn't dawn on me until the end of the novel; each story is a look into his existence and outlook upon the world. It's one of those few books where I really would enjoy, and would probably get a lot more out, of with a second reading.

Basically, I found most of the main character's stories incredibly boring until the last twenty pages. Really, the book went from 'poor' to 'good' in a matter of two pages. I won't spoil it for you but there is a tirade from his aunt that is truly one of the best speeches I have ever read in a book... where was this passion and writing the whole book (I guess that lack of passion was the point!)?

Overall, it's an interesting book. It's very odd but as I was reading it, I really didn't enjoy it. I didn't look forward to the next chapter or picking it up later during the day. As some may recall, my rating system is based purely on the 'entertainment' value the book provides to me; and this book struggled to entertain me through 95% of it. However, now that it's finished, and I reflect upon the story and major themes, it's gotten better and better. So, if you want to read a book that will keep you interested but not blow you away but THEN, when you are done, really start making you think about what the book was really about (and of course what life is really about), than this is the novel for you.
Posted by droth8um at 8:56 AM No comments: 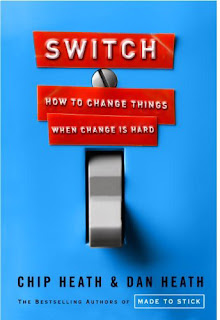 I have a fixed mindset. That was one of the things I learned in Chip and Dan Heath's fantastic book Switch. That is not a good thing. It means that I think people are static and can not change; which I really do believe. Apparently, this is bad and wrong.

I was recommended this book by a colleague and would have to say it's about half, fun "Outliers" type of book and half, academic type of text. Basically, its a book about how you make changes. Changes in your daily life, changes in the work place, changes in a family, getting other people to change...pretty much any change that is hard to do.

Normally, I am not big into organizational change/self-help type of books but this book was excellent. First, it was well written. Short and easy to read chapters and sentences. Second, it had great stories and anecdotes; they were very well told and applicable. Third, it was easy to understand and broken down into three specific things to do. Fourth, it included great suggestions and links to other books that are related including Nudge and Outliers.

And now, for the million dollar question, I will tell you how you can easily create change and save you from reading the whole book. You ready for it? Here it is:
1. Direct the Rider
2. Motivate the Elephant
3. Shape the Path
Uh, You're Welcome! I just took the whole book and explained it to you. Well, maybe not, but if you would like to read a very interesting and worthwhile book about change (and really understand what those three things are) , do check out Switch.
Posted by droth8um at 6:28 PM No comments: