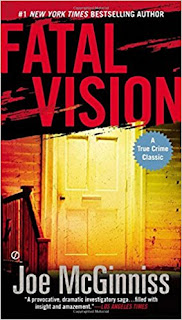 Fatal Vision has been on my "to read" list for a number of years. It's one of the best true crime books ever written, some saying on the same level of Capote's In True Blood. While it is a bit dated, and certainly has lead to some controversies, the book was enthralling and I couldn't put it down. As you can see above, it is one of only a few books I've ever read to earn a 5 star rating.

Quick premise if you are unaware about what it covers: Jeffrey MacDonald, a Princeton educated, Green Beret doctor is accused of killing his wife and two young daughters. Although the murders occurred in 1970, he was not put on trail and found guilty until 1979. Why? Well, that's what much of the book covers. Actually, the book goes back well before 1970, tracing MacDonald's early life, through the murders, and much afterwards. What's fascinating is that McGinniss became quite close for a number of years to MacDonald while working on the book (which led to some of the controversies noted earlier). McGinniss does an amazing job of weaving the varying timelines throughout the novel. So, while you are moving forward from the murders through the various evidence gatherings and trial, he also is going back in time to reveal more and more about MacDonald's life and history. In fact, the first quarter of the book vacillates between a love story between MacDonald and his wife (at least from MacDonald's vantage point) and a gritty crime story.

So, why did the book earn an elusive 5 star rating? Because it's undeniably fascinating and addicting! While close to a 1,000 pages, I flew through this book in only a few weeks (aided by lots of free time during Spring Break). I really struggled to put it down. As much as many have questioned and derided McGinniss' work, I found his writing simple, yet exhilarating. His way of slowly raising small issues, detail by detail, and then letting it grow until it overtakes your thoughts is simply amazing! While I have read my share of true crime novels before, this was the most awesome in scope, story and mystery. And that truly is what this book is all about - mystery! Did he do it? Could he have done it? If so, how? If so, why? If not, why is the evidence and stories (yes, stories, they all change often) so confounding?

In fact, that was another remarkable piece about the book - how much I still wanted to read and learn about after finishing. While this book came out in the early 1980s, McGinniss wrote two epilogues,  the last in 1989 to directly address other staying that he tricked MacDonald and got too close to him. Since, then, of course, there has been more "evidence" and statements brought about. This includes a 2012 book offering a different viewpoint about what really happened.

In the end, I'm left a bit like I am with the JFK assassination (an area of deep immersement of mine for a few years); while I think I know what happened, there is about 15% doubt in my head. And this 15% doubt is really tough for me. I want so much to know what happened on that night. Who is lying and why? But, alas, like many great crime mysteries that will likely never be solved, and, instead, I'll have to continue thinking back to the vivid experience of reading Fatal Vision and continuing to guess at what might of happened to the MacDonald family that evening.
Posted by droth8um at 10:37 AM No comments: 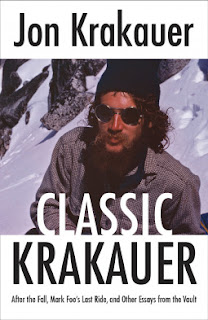 So, Classic Krakauer is actually a newly released book though it is a collection of essays he's done over the past 20 years. Nearly all are focused on nature, or some connection to nature, but his classic straightforward and pure writing style is a commonality of each essay.

I must profess that I am a big fan of Jon Karkauer's writing. He has written some great non-fiction books. Among my favorites are: Under the Banner of Heaven, Missoula, Where Men Win Glory, and probably his best, Into Thin Air. It's odd, because I often don't realize how much I like his writing until I finish one of his books and realize just how engaging and well he tells stories; it was no different  with this one.

Classic Krakauer is a collection of about a dozen essays he wrote in various publications over the last few decades (Smithsonian magazine, Outside magazine, etc.). Only about 150 pages, the varying subject matter and classic succinct language, makes this an easy but thoroughly enjoyable read. Many of the essays cover climbing; be it going downwards, into deep New Mexican caves, or more often, going high up, either at Everest, the Cascades and everywhere in between. My favorite two essays included a fascinating exploration of Mark Foo's (a famous surfer from Hawaii) final wave and a look at the terrifying wilderness programs that teens are sent to and, far too often, die while part of the programs.

Clearly, if you don't like a good adventure story, hate nature or find  Earth an uninteresting place, these will not be for you. If, however, you are in awe of our beautiful world and the amazing places on it and man's continued push of himself to conquer this planet, than this book is for you!
Posted by droth8um at 7:27 PM No comments: