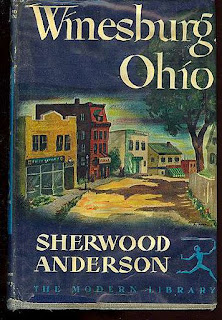 Sometimes there is just not a lot to say about certain books. Sherwood Anderson's Winesburg, Ohio falls into that category for me. It was a sort of a good book...yeah.

Let's see. I was reading something that included Winesburg, Ohio as a sort of unsung hero of not so famous but should be American novels. It's about 300 pages and includes 15 or so short stories all revolving around people, or 'grotesques' as Anderson calls them, living in Winesburg. It kind of reminded me of Canterbury Tales. Obviously much easier to read, but both were about characters that sort of stood out compared to others in life/the town.

The stories are all pretty good. They are told very simply and are very straight forward. Because they are just short stories, you don't get a whole bunch of character development and it's more of snapshots of their lives than anything else. The genius of the book, and I think why many critics loved it (and still do), is that so nicely illustrates and describes life in small town America around the turn of the twentieth century.

If you like period pieces, short story fiction, or tales about just 'real' life, this would be a good book for you. It's an easy read and you can get through the stories quickly. The drawback for me, and why it only earned 2.5 stars, was that it just was not entertaining. As most stories had nothing to do with others, it never drew me back into the book to keep reading. Being about 100 years old, the stories are also a bit old in topic and although risque at the time and pushed social norms, compared to modern day 'drama' it does not compare.
Posted by droth8um at 10:27 AM No comments: 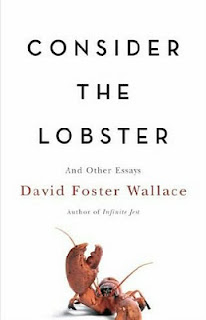 Very recently I became aware of a wonderful author, who up until a month ago, I absolutely had never heard of. (btw, he would have hated that I just ended this sentence with a preposition, though he would have loved this footnote like parenthetical note). It was through a cool website called grantland.com that posted a gigantic (5,ooo word?) essay Wallace wrote about Roger Federer. Needless to say, it was fantastic. I asked my sister about him and she had heard of him, had a book of his, and recommended a graduation speech he gave, which I ended up also enjoying (read here). She then passed on a book of essays from Wallace titled Consider the Lobster which has led to this review.

This book includes about 10 different non-fictions essays from Wallace that were collected from a variety of magazines and on a variety of subjects. Some are only a few pages, while others go on (and on) into the 70 or 80 page range. I liked them all; well, I guess I should say I like they way they are written. First, Wallace is just plain cool. He understands things very well and his writing style is a joy to read and pleasure to digest. Second, he is unbelievably bright. The most confusing and frustrating essay is a review of a recent dictionary that was released that includes Wallace's views on literary criticism and correct writing techniques and terms. It was about 40 pages long, I was lost for about 37 pages of it yet I still found it enjoyable...that's David Foster Wallace. Third, he is incredibly funny. From being ironic to obvious with jokes to just plain crude, his essays can't help but make you laugh. Fourth, and probably what he is most famous for, he is the master, I say MASTER, of the footnote. He uses them all the time and his footnotes have footnotes. It's almost his claim to fame. They're awesome. Fifth, his insights and conclusions about ideas, events, things, are just so well thoughtful you can't help but keep on reading and smiling.

More about the stories. The title of the book is also the title of a 20 page essay about lobsters, and specifically, should we consider the ethical and moral standards of how lobsters are killed... it was good. Other essays included a biography of a late night radio host, musings about Updike and Kafka (I'm telling you, the guy is wicked smart), and Tracy Austin (fantastic tennis player from the 80's who won a US Open before 18, got hit with the injury bug and never made it back -- great story with great insights). Do be aware that the book starts with a 50 page essay on porn which takes some work to get through but the book is smooth sailing after that.

My favorite essay is called "Up, Simba" taken from a Rolling Stone piece Wallace did during the '00 election as he followed McCain around the campaign trail for 7 days. Being a political guy, I found this essay absolutely captivating and enjoyed reading the 70 pages (which must have included huge amounts that were cut for RS mag). Besides coming away with much more respect for McCain, I came away questioning the intents and reasons why politicians do what they do. It is an excellent, excellent essay.

Overall, the book is very good. Some essays go on too long and some, as I said earlier, are hard to understand. Some subjects are more interesting than others, and some words he uses I don't understand. But, for the most part, the essays are incredibly entertaining. They are smart, funny, clearly written, and incredibly informative.

After finishing the book, I looked to see what other non-fiction stuff he has written. Apparently, he has done a lot of very good fiction and many consider him one of the best writers in the past decade. There is not a lot of other non-fiction stuff he has done. And, perhaps most unfortunately, there will no more writings at all from Wallace; he committed suicide in 2008.
Posted by droth8um at 12:05 PM No comments: