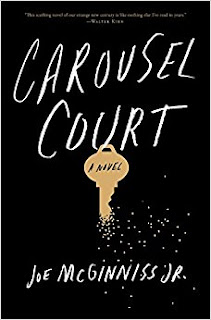 So, how time flies. 8 years ago, I read and reviewed Joe McGinniss Jr's first novel The Delivery Man. I knew him briefly from playing some basketball while living in D.C.  Anyway, the book was pretty awesome and well worth reading if you have not picked it up. However, I would recommend you read his newest book first.

Carousel Court came out earlier this year and is a fantastic read. Similar in many ways to his first novel, it's gritty, drug induced fun for the whole family. And this one really is about a whole family. Newly married couple moves to California with a young child and quickly goes under water on their new home. As they struggle to figure out what to do, their marriage begins to unravel and both find their own outlets to maintain whatever sanity they have left.

As I rate books on entertainment value, this one is a knock out. Gripping and hard to put down, I flew threw it in about a week. It was a kind of a mix of Gone Girl and Girl on a Train but seemingly more realistic. The author does a fantastic job describing the history of the two main characters in engaging ways while still keeping the pace of the novel moving forward. Also, he has a great knack for quickly moving from a description about a scene, that includes intimate details to help visualize, to out of control drug use and violence.

The book also hits closer to home than the last. Not that my marriage is falling apart and am behind on mortgage payments, but I can relate to the loss of one's 20s and the "grind" of work and kids on a daily basis. Again, the author does a good job of framing, albeit probably an outlier of a situation, what many in some parts of country are struggling with too often.

Overall, I thoroughly enjoyed this book. It was an engaging and entertaining read, and it's wonderful to see the author continue to hone his already impressive skill set further.  Like this last book, it would get an "R" rating, but the story is a good one and characters quite interesting. I only wished he would write books more often than every 8 years (though, if there always this good, I can wait!).
Posted by droth8um at 2:30 PM No comments: 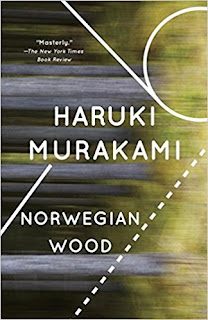 Haruka Murakami is one of the most accomplished and well known contemporary science fiction writers.  I've had1Q84 on my list to read for a few years now and was going to tackle but persuaded myself to check out Norwegian Wood instead. Why? Two reasons. First, 1Q84 is like 1,000 pages and I wasn't up to take that on after just finishing one of a similar length and I didn't know if I really wanted to go "all in" on one of his science fiction books. Sure, I could have read one of his shorter books that were more typical of Murakami's style but instead choose the very "straightforward" Norwegian Wood. Did I regret it? A little.

This book is a very slowly told love story about a college age student who has fallen in love with two women. The book is also incredibly depressing, has a dreary outlook on the world, an over abundance of focus on sex, lots of elements of suicide and a confusing ending. Sooooo, I had a real mixed experience with it.

On a positive, this book actually made me think far more about it after I finished it then during. The book is a bit of a slog to read, with nothing extremely exciting for long periods. However, the book is beautifully written and has a great deal of nuance and subtlety. Unfortunately, sometimes the book was so subtle and points made so hard to decipher, that it simply felt boring. Nonetheless, upon concluding and thinking/looking back at what transpired. I was more intrigued than when I was reading. What to make of that? Certainly, it's a good sign the novel was so thought provoking and ending open to interpretation that I continued to mull over various parts but what does it say about the entertainment value of reading it that I continually felt it wasn't moving anywhere?  I know one might argue that the novel was supposed to mirror real life, and is most likely Murakami's most "traditional" novel, but when the reader continues feels frustration from the lack of plot movement does that matter?  Will I continue asking more questions of myself in this blog?

Well, I'm not sure what to think about Murakami at this point. This book made him a star in Japan and at least three of his books are incredibly well acclaimed, but I really didn't love this one.  It was fine but I really couldn't get into the "love" story aspect of it and the dreariness of the tone. However, I definitely want to take one of his more traditional science fiction novels to try to get the full Murakami experience. In the meanwhile, do feel free to check this one but be forewarned about some of the concerns noted above.
Posted by droth8um at 1:53 PM No comments: