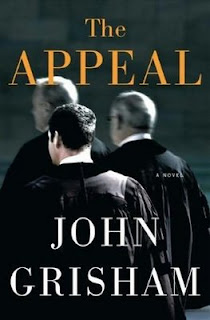 I used to love John Grisham. I think I have read all of his books, and I used to think the Pelican Brief and The Client were the greatest things ever. Things have changed, however. Either his books are getting dumber or I am getting smarter (most definitely going to go with the latter).

I just finished Grisham’s new (I would say newest but I think the dude puts out like two books a year and I just can’t keep up any more) book titled The Appeal. As I said previously, things have changed. This book did not grab me like his other books. It did not seem to have the same breakneck pace of others book. It even did not have a great ending like his other books.

The book, as you can probably guess, is about a court case that gets appealed. The novel is told in three parts, the case, the election of a judge, and the opinion. Basically, Grisham uses the same old formula for this book as he has done for every other book he has written since I was in Middle School. Take a group that is wronged (in this case poor Southern folk who contracted cancer in a small Mississippi town) have them go up against the money grubbing corporation (chemical company that dumped toxins – tagged team with billionaire stock dude Carl Trudeau) and watch as they end up obtaining justice (while losing a few people along the way – in this case, 17 dead cancer patients and a bankrupt married lawyer couple).

The really unfortunate thing about this book, however, is that Grisham forget the one best part of his FICITIONAL books – the bad guys won in this one! Sorry I ruined this for all you avid Grisham fans, but really you can still read it and get as little out of it as I did. Real quick, basic plot: people get sick, win the case in lower court for $41 million, it gets appealed to the Mississippi Supreme Court, rich business people buy a seat on the Supreme Court because they have judicial elections in Mississippi, the case gets to the Supreme Court and the new Justice has to decide the case.

What’s frustrating to no end is that you realize once this guy gets to the Supreme Court he will go against the original ruling and not give the poor people their money but then something (a miracle almost?) happens to him and his family and you are left hoping he LEARNED something from it and maybe grew a HEART. But alas, things don’t work out that well.

The only somewhat redeeming characteristic of the book, and probably the reason for the less than joyful ending, was Grisham’s message to the audience of the book – be careful about judicial elections. Basically, he believes, justice (I guess you could call it that) can be purchased; i.e. if you elect certain people to a court, they will vote certain ways. I never knew that this was a big problem but I guess it is since Grisham wrote about it and even wrote a sad ending to make us realize what an issue it is.

Overall, the book is a quick read, keeps you fairly interested and makes a useful (maybe?) point about judicial elections. Just don’t expect your brain to really be piqued or an ending that pleases. 2.5 STARS.
Posted by droth8um at 7:15 PM No comments: 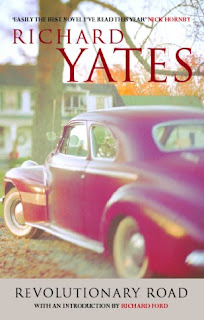 So about a year ago I heard about the book Revolutionary Road . Although this book was written about 50 years ago, I had not heard about it nor known anything about until recently. Coincidentally, Leonardo DiCaprio and Kate Winselt made a rather big deal movie about the same book a bit less than a year ago. My point of these initial ramblings was that I was aware and already ready to read the book prior to the movie (note that I chose the older book cover rather than the new one with Leo and Kate on it ). I was not and am not one of those people who reads the book because the movie looked so good (well, there is the Godfather but whatever). I would like to see the movie after finishing the book though.

(On an useful side note, I am of the opinion the Leo DiCaprio has never made a film that is bad. In fact, quite the opposite, every one of his movies and even TV appearances are awesome. Now, there are probably a lot of guys out there who think he is just a pretty boy… which he is, at least that what the ladies tell me. But his movies are awesome… off the top of my head: The Departed – great; Catch Me if You Can – not bad; Titanic – awesome if you get past the love stuff; Gangs of New York – awesome; Blood Diamond – good; Basketball Diaries – cool; heck, he was even good when he was on Growing Pains as a kid. So my point is, Leo’s movies are pretty awesome and I defy anyone to attempt to argue that I am wrong).

Anyway, back to the review – the book is definitely worth a read if you have a chance. It’s fairly short, there’s a lot of interesting dialogue and for most readers of this blog (I know how who you 2 are) this book might make you think about your life right now. See, the book is basically about people settling down, following “society’s plan” and wondering if this (you know, normal conservative American life) is truly the best path or most purposeful life. The story is about Frank and April Wheeler, a married couple with two kids who move to the ‘burbs outside NYC. They buy the nice house with the picket fence, have the 2 kids, wife stays at home and does what wives do in the ‘50s. Of course, it’s not that easy. Both April and Frank want much more from life. They want to travel and believe in the land of Europe (France specifically) life would be oh so different…rosy in fact.

That’s the premise anyway. The story then continues as they face questioning from friends and colleagues wondering about the efficacy of a plan that moves a family to Europe with no jobs, place to live, etc. Drama plays out, emotions are wrought -- you get the idea. Eventually you get a pretty good ending and can’t help but be frustrated with Frank and April.

Overall, the book certainly makes you think, wonder about things, and question why these people believe what they do (if nothing else, it will make you feel great about whatever relationship you might be in or could be in). I was told that this book is a favorite of writers… I can see why, the characters and story develop very nicely and like most artists, writers sometimes see beauty in sadness and loneliness (sorry for the revelation but you’ll see plenty of it in the book). The book’s real genius is in its subtle, ironic and emotionally charged subjects. For anyone who has ever questioned “society” or what being “normal” is, this book is worthy of a reading.
Posted by droth8um at 11:16 AM No comments: 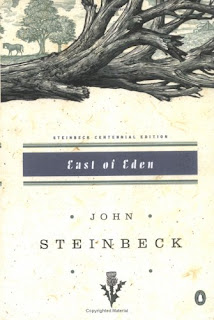 It's been a while since I have blogged: work stuff, long book, other things going on... but after a beautiful, relaxing and enjoyable Spring Break in Florida, I was able to mow through a couple of books (further reviews to come) and also finish John Steinbeck's East of Eden. I give this book an emphatic 5 stars.

To begin, this book was epic. Besides the rather stupefying length (around 700 pages -- big, long pages with little print too) the depth and weightiness of the subjects of the book were more than dramatic.

The book is basically a story about a family -- The Trasks -- and the tale of 3 generations of this family. Starting in the East Coast and finishing in the Salinas Valley in California, this story focuses on the lives of a few individuals. Wrapped up in the story and weaving throughout the whole novel is the underlying focus of good vs. evil. In fact, part of the story is actually a retelling of the story of Cain and Abel.

Although the book starts a bit slow and struggles a bit in the final 100 pages (the plot suddenly seems a bit less interesting at spots), I really loved the book. The story was fascinating to read and the characters are so richly and carefully developed you immediately become familiar and emotional about each of them. Lee and Sam Hamilton are certainly two of my favorites. As this story covers nearly a century in time, there is plenty of birth and death and the cycle of life is certainly developed over and over.

The genius of the novel, however, is the constant depiction of good and evil throughout the characters in the novel. Steinbeck beautifully questions and re-questions what and where good and evil really come from. The old debate of nature vs. the environment are constantly reviewed. In fact, Steinbeck often refers to the Bible and the story of Cain and Able becomes a vital part of the novel.

I could write forever about the characters, the symbols represented, the motifs etc. in the book.... however, I would rather end with quote from the book that summarizes what this book (and life maybe? --- deep, I know) really means:
"I believe that there is one story in the world, and only one. . . . Humans are caught—in their lives, in their thoughts, in their hungers and ambitions, in their avarice and cruelty, and in their kindness and generosity too—in a net of good and evil. . . . There is no other story. A man, after he has brushed off the dust and chips of his life, will have left only the hard, clean questions: Was it good or was it evil? Have I done well—or ill?"

Can man choose to be good or evil or is that already forced upon a person from birth? I bet you'd like to know Steinbeck's answer to this...well, I won't tell you but next time you have a good break available and want to read a simply amazing story, pick up East of Eden. You won't be disappointed.
Posted by droth8um at 5:22 PM 1 comment: