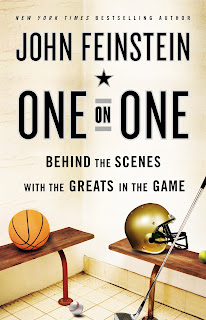 Not long ago I heard an awesome radio interview with John Feinstein telling some great stories while promoting his book One on One. They were real great stories that included tales about Mike Kryzerwefski (sp?) and John McEnroe. They were very entertaining and made me super interested in reading his book. Unfortunately, listening to those stories over the radio proved far more entertaining than reading the book itself.

Quick background: Feinstein has written a bunch of books about sports. I have never read any. Supposedly they are very good and his first, about Indiana and Bobby Knight, sort of put him on the map. I see him on TV sometimes in the D.C. area and find him interesting and super arrogant. Anyway, the book is basically an autobiography about his first book about Knight and his books afterwards. In it, it includes a lot of back stories about many different individuals in athletics.

The good parts of the book are also what makes it sort of annoying. I guess Feinstein's deal is that he is like super honest about people. So, the ones he thinks are good people, he shows why over and over and those he thinks are jerks, he explains that over and over. Unfortunately, this ends up just coming off as super petty and really vindictive. I mean, honestly, how many times can he go after Bobby Knight and Tiger Woods and say they are jerks. I get it already; move on.

The book is about 400 pages and gets 3 stars because, while I did enjoy reading it and it was entertaining, the stories got pretty boring by the end and I couldn't stand Feinstein's deal of having to show all the ways he was better or smarter than people along the way. He became incredibly annoying by the end but some of the inside sports stories about athletes was illuminating.

I suppose if you have liked Feinstein's book in the past, this would be a great book for you. If not, perhaps not so much. Like I said, the best part of the book was actually hearing Feinstein tell a couple of the stories over the radio.
Posted by droth8um at 8:08 PM No comments: 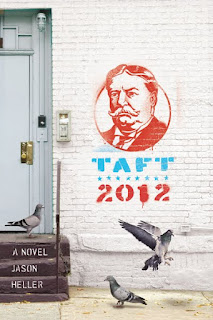 Taft 2012 is a fun read. It's a relatively new book by a first time author, and it is the fictional tale about William Howard Taft coming back from the dead to modern times. It's a very fast read, was decently entertaining, but it didn't have a lot to it.

The book is basically a look at the current state of American politics and the author, through Taft, explains his point that our current system is very negative and the two parties lack of bipartisanship is significant. Taft, who you can't help but love as a character, is the center of the novel.

While I enjoyed the silliness of the book, it was a bit slow in portions and the ending, to me, was a bit lame. Though the author did a really good job of relating the modern media environment, by interspersing Twitter updates and talk show interviews between chapters, the book just wasn't a great story after you got past the coolness of Taft trying to figure out modern day life.

The book is certainly not a bad read, and as I said, is a very quick read; but, I would not recommend it one of the better novels. Though it's a fun story and good critique about modern politics, the story struggles to move along and end successfully.
Posted by droth8um at 12:51 PM No comments: