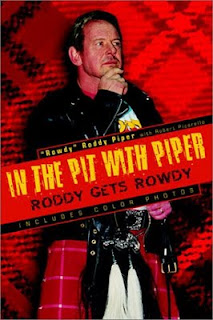 I need to make a confession to explain how I could have possibly finished and reviewed a book that only received (a generous) 1 star... I used to be obsessed with wrestling (or wrastlin' as some might say). Really, I used to love it. As a kid between about ages 7 and 11, I was super into it. I watched it all the time, had my own championship belt, used the figure four leg lock on my sister and even had the Hulk Hogan/Iron the Shiek sheets.. I was nuts about it.

So, when I was recently at a soon to be defunct Books-A-Million and saw Rowdy Piper's In the Pit with Piper, a book on my "Books to Read Eventually" on the right, for only $2.17, I felt obligated to buy it and check it out. I figured, Piper was a pretty awesome wrestler when I was a kid so why shouldn't those skills translate to being a great writer as well? How wrong I was.

So, the book is pretty much awful. I mean, it's really quite bad. Perhaps what was so bad about it was that it was actually kind of long. I mean, it's only 230 pages but it took me weeks to go through as it's kind of a lot of text and so INCREDIBLY boring. I really though it might be interesting. Perhaps talking about some of the famous matches, some insight into the tricks of the trade, maybe some secrets about the famous wrestlers. Nah, none of that. What I did get was the incredible amount of arrogance and ego Piper has. I also got, about 230 pages of the most unbelievably, poorly written sentences and paragraphs ever to grace the pages of an actual book. Seriously, there are grammar mistakes, a complete lack of a theme, and stories that are so disparate and unrelated you wonder how an editor or publishing house sent this out. One thing you know for sure after reading this, there was NO ghost writer. I really was hoping the stories would be better, but so many of them were the same: I wrestled hard one night, I got drunk, me and some buddy's thought it would be funny to _________, I woke up the next morning in a parking lot. Ridiculous.

The only slightly redeeming part that came out of these random thoughts we'll call a 'book' is Piper's chapter on what he dubs "The Sickness". Basically, "The Sickness" is his word to describe the addiction and passion that these wrestler's have to this sport that they love. Now, don't get me wrong, I know, as do you, that wrestling is not real; BUT, it's not totally fake either (another quick annoyance of the book, Piper would never actually say wresting is fake and tells more than few stories about beating guys up who questions wrestling's authenticity...ah, classy). What I mean by not totally fake is that these guys do take a beating. They are still hitting a mat or the ground and getting bounced around night after night (see The Wrestler if you don't know what I'm talking about). Anyway, Piper's point is that wrestlers will do anything to themselves to make sure they can wrestle. They are addicted and literal 'sick' to the point that they HAVE TO WRESTLE. This includes an incredible amount of self-medication. Specifically, alcohol and drugs. It's actually incredibly sad. There are an unbelievable number of wrestlers who have died well before they should have (Google search it) because of heart attacks, drug overdoses and suicides. Piper would argue that's all because of "The Sickness".

Overall, I can't possible recommend you read this book. However, I would recommend you watch or re-watch Wrestlemania I through V... that's some good stuff. And, if you are like me, you might even get to watch a little bit of your childhood with it (tear).
Posted by droth8um at 9:34 AM No comments: 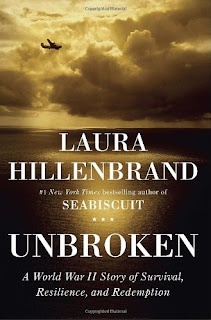 When picking out a gift for another person, it's always an added bonus when that gift can also be a gift to yourself (i.e. giving someone two tickets to a game they will take you to or an household appliance that everyone gets to use). So it is with Unbroken, a Christmas gift to my wife, who after finishing the book, passed it on to me. (Side note: my wife enjoyed it far more than me and quickly told me that it must be 'at least' 4 stars after I contemplated out loud giving it a 3.5 star rating...which it probably should be). Unbroken has been the #1 non-fiction book on the New York Times for the last few weeks so one must assume it is good, and I suppose it is good, just not great.

I was drawn to the book because: a) my wife raved about it and kept telling me how incredible it was and b) Hillendbrand's last book (a while ago) Seabiscuit, was awesome...Seabiscuit this is not. The book is the true story of a WWII POW Louie Zamperini. It basically is the story of his life from birth, to world class runner, to fighter in the Pacific, to eventual Japanese POW.

The story is without a doubt unbelievable. No, literally, I sometimes wonder if all of what is described actually happened. Much of the story can only be substantiated by 2 people, but if it is true, it's one of the most incredible stories of survival and perseverance ever told.

Other good things: Hillenbrand crafts a very nice story and does a superb job of only including the most pertinent and useful information. Using crisp, easy to follow language, the tale is remarkable and she pointedly creates a 'good' vs. 'bad' mentality. Also included are some nice pictures in the book. Normally, not something that is included or important in adult level books, these photographs make the story come to life even more and vividly show the characters told in the book at different parts of their life thus making the story even more full and real.

The story didn't receive a higher rating simply because the entertainment value was not there. Although it was a good read, I never felt like I couldn't put it down and I didn't think that the reader's interest was held at the end of each chapter. I also didn't like how the actual story worked out. Obviously, as it was non-fiction, there was not much that could be done about that, but it still took away from the overall book for me. Also bothersome, and again there is nothing that can be changed about it, the story is quite sad and depressing. If you didn't already know, living in a POW camp is pretty much awful and good chunk of the book is describing and retelling that experience. Obviously critical to the plot and story, I nonetheless found this difficult reading.

In the end, even though I didn't love the book, I would highly recommend it. I believe the story would interest most readers, and it must have some sort of mass appeal if it's number 1 on the New York Times bestseller list as many weeks as it has been. There is no doubt that Louie is an American hero, and there may be no better time to read and remember this greatest generation as right now as this generation of heroes will be all but gone by the end of the decade. Unbroken will assure that Louie and others never fade away.
Posted by droth8um at 5:37 PM No comments: