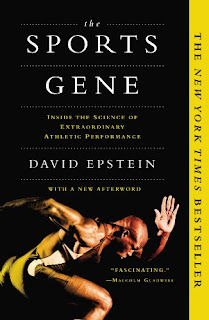 While David Epstein's new book, Range, is getting some positive reviews, his earlier book, The Sports Gene, included many of the viewpoints espoused in his most recent book. While I look forward to reading, Range, I really enjoyed The Sports Gene.

The premise of the book is pretty interesting - basically, based on recent scientific discoveries, there are some underlying genes that make people better/worst at certain sports. What's also interesting is that he also party discredits some of the more common views that "you can grow up to do anything" or the now normed, 10,000 hours idea (which is that you need 10,000 hours to become an expert in anything (popularized by Malcolm Gladwell)). The book goes on to talk about all the different findings regarding the discoveries about the human body and that affect on athletes from around the world.

Overall, the book is really quite fascinating. For me, it was an interesting read as the majority of the book was talking about why athletes are great and experts at what they do. Unlike, many of the past book recently about this topic, including the reviewed Talent is Overrated, it was interesting to hear more about the other side of the nature/nurture coin. As you can imagine, some the author's premises are difficult for others to hear/want to discuss. First, he basically puts out that your genetic make-up has a lot more to do with success than hard work; not a great narrative for many coaches/parents/teachers to hear. Second, there is a lot about race that goes into this book which also can be hard for others to digest. For example, science has shown (and reality) that runners from the eastern part of Africa tend to be much stronger at shorter distances, while those on the western part (see: Keyna marathoners) tend to be much better at long distances. Science has shown different genetic make up (that they believe were based on revolutions over time based on their social needs) between the two sets of people. Similarly, if you ever notice that many of those winning 100 meter dashes in the Olympics come from Jamaica (again, a similar gene arrangement).

The only downside of the book is that, on too many occasions, it goes a bit deeper into the science than necessary. While I do feel the author did a good job breaking very complicated science down to easily digestible pieces for laymen readers, there are sometimes long passages or almost page(s) dedicated to the specific scientific underpinnings that make his point. While not a huge negative, it did take away from the reader on some occassions.

As a whole, I really enjoyed the read. Mixing peak athletic performance, with a philosophical mix of nature/nurture, this book was right in my sweet spot of interest. I also enjoyed hearing a more slanted nature viewpoint to help balance most of what I have read/heard more about lately. While I do believe (as does the author) that it is a large mix of both to be an expert at anything, this book does jive with my own "eye test" about observing athletes becoming great (just take a look at how many NBA players have only started playing in their past few years of life). Do check this book out if you have any interest in what makes superb athletes or the science behind the "nature" trumps nurture idea.
Posted by droth8um at 10:17 AM