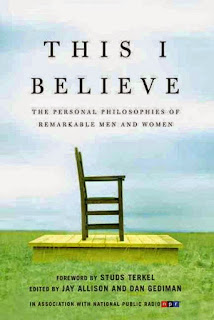 This is I Believe is/was a radio program/book that has been around for over fifty years. Surprisingly, until someone passed on this book,  I had never heard of it but am happy that I am now aware of this cool concept.

So, this book is based on the NPR radio series of the same name. Similar to the book, people write/record about their own personal vies and philosophies about life. There are a couple of cool parts to the concept. First, the responses have to be fairly short; I think no longer than 500 words. Second, it's an eclectic mix of people responding.  Some are famous individuals and others are quite "common" individuals from across the United States. Third, the variety and diversity of responses is fascinating. Some are incredibly thoughtful and deep and some are just humorous (and still deep) - like be cool to the pizza guy!  Finally, it's cool that while Edward Murrow began this program over 50 years ago, NPR reintroduced it years ago.

Overall, it's a fairly entertaining and enjoyable read. I liked the wide variety of authors, writing styles, and different thoughts that guide people's views on living their lives. Out of the probably 40 essays, about a dozen really resonated with me and were dogeared for a future read.

The downsides of the book are minimal. Again, the essays are easy reads and fun to get a glimpse into different people's outlook on the world. My small nits include that while the essays are thoughtful and well written, many are not super engaging or don't resonate with my own views on living...which led to my other challenge, trying to think about what my 500 word "this I believe" would be. What philosophy do I live by? What are the guiding tenets that I follow as I enter the second half of my life? Well, those are tough questions that I wasn't planning on wrestling with while trying to sit down to enjoy a book!

With all joking aside, this really is a neat book and concept. I'll certainly check out the NPR program as I could imagine that the versions spoken over the radio seem even more impressive than their written duplicates. Overall, I do recommend the book, just know that you may end up pausing to think about what exactly you believe.
Posted by droth8um at 8:12 AM