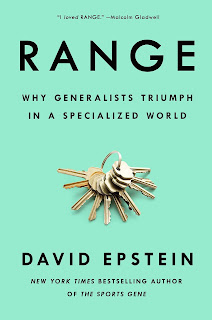 Overall, the premise of the book is fantastic. I think he's questioning about the limitations of specialization and the importance of people being able to think in a more broad way is incredibly important. I just don't think you need such a long book to make the point. If only there was a condensed article to save the time; alas, here is a perfect one from the Atlantic written earlier this summer. Enjoy!
Posted by droth8um at 9:07 AM