As the real title is too long, I'll just reference this book as The Bronx is Burning. You may also be aware of it because ESPN did an 8 part miniseries with the same name in 2007. I did watch the miniseries as I was finishing the book and it was fun to have some visuals to compare to the story (the miniseries is odd but also kind of cool as they have decent actors playing the major stars in the book while including real video footage from the 1977 to make it more realistic).

If you are not familiar with the book or miniseries, both take on the crazy year of 1977 in New York City. While the miniseries is nearly all focused on the Yankees story line of Reggie Jackson feuding with manger Billy Martin, the book covers far more areas of interest. While the baseball story line still dominates the book, there are also fascinating stories about the mayoral election which included 4 fascinating candidates, the Son of Sam killer who had been terrorizing the city for more than a year, and some other interesting storylines (disco dying and punk music coming, a momentous blackout which led to massive looting, and newspapers changing to tabloids).

In general, the book is engaging and the writing is crisp and interesting. As someone not alive nor informed about many of these events, the stories presented are notably diverse but fascinating. Most interesting are the personalities involved. All intelligent in their own way, how they move forward to meet their goals, and how that often conflicted with other's goals, makes a great story.

As my father would say about a book of this type, it's a real "slice of life" (which, after Googling, I realize my dad did not invent, but took from the observation of literature/theater - but still a great term, nonetheless). With a decent length and many memorable details, this book really puts you in NYC during the crazy year of 1977. I love books/movies/TV of this type - ones that take a real deep dive into something so the reader/viewer can see the nuance in a deeper way. If you like the same, do take a look at this book! 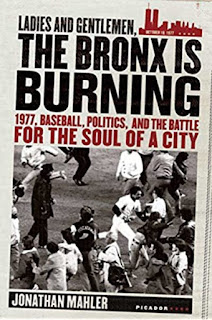