Luckily for me and any possible readers, there is no correlation between the length of my blog and the total pages of the book being reviewed. This is especially good news in the case of my review for Team of Rivals: The Political Genius of Abraham Lincoln. While an entertaining and enlightening book about the life of Abraham Lincoln and critical members of his Cabinet, this book did check in at nearly 1,000 pages! (On a positive, the last 200 was nearly all footnotes and resources).

As noted, the book is quite long and comprehensive. While it serves as both a biography of Lincoln, sharing about his early life and transition to the White House, it also gives similar biographies about the main competitors to his first presidential run and eventual Cabinet members. Such fascinating people included William Seward, Salmon Chase, Edwin Bates, and others. The genius of Lincoln was in how he treated others, especially those that he disagreed with or competed with him. The fact that he wanted the three biggest competitors (some from different political parties!) to serve in his Cabinet as his most trusted advisors, tells you much about him.

Ultimately, the best parts of the book were about the genius of Lincoln. This included his personality, his strong sense of fairness and empathy, and his excellent political understanding of people's motivations. It's hard to finish the book and not believe he was the greatest president in America's history. Besides keeping the Nation together during the most challenging period in our history, the reader leaves with a strong feeling that Lincoln is also among the greatest human beings in our history as well.

Unfortunately, I had hoped that more of the book would focus on Lincoln's intelligence and determination and less on the retelling of much of the battles of the Civil War or specific and detailed historical aspects. Honestly, the book could have gone for a good editor as there are multiple parts that were unrelated to Lincoln and only made minimal sense in the scope of the novel.

As a whole, it's a strong book if you have the time and interest. It's impossible not to walk away enamored with Lincoln and the tremendous efforts he put forth to keep the country together. While his life was cut short early, he did more in his 56 years than most men could do in a thousand life times and Team of Rivals does an excellent job explaining his greatness. 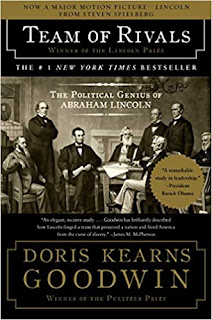