You probably are more familiar with Andy Weir's more famous book (and movie) - The Martian.  Here is my review of it. Artemis was his follow-up release, and while it was not as entertaining as his first book, it's still a decent read, especially if you like science fiction.

This book was not what I expected. While I thought it would be similar to the Martian and mostly be a novel about a person overcoming the challenges of space, this was really a crime/mystery novel that HAPPENED to take place in space (I'm a poet and I know it!). Really, the first 1/4 to 1/3 of the novel was spent introducing the narrator/main character and explaining how Artemis (the first colony of the moon, taking place circa 2080) works. This is pretty much what I thought the entire book would be about; which was fine with me. The author does a good a job as possible to explain how things work on the moon and the science behind while most things are designed.

Then, unexpectedly, the novel swerves into a crime novel that leaves the reader not sure people's motivations and where the story might go. This is both where the book became good and became more confusing (at least to me). The crime story is pretty fascinating and you can't help but love the main character. Weir also has a fun way of telling stories (sardonic and playful) that you may remember from The Martian.  My problem, is that while I enjoyed the mystery and crime story (typical, small group of people have to save the world!), the science got more and more confusing as the action became more and more complicated. While the author did as good a job as possible to explain with great detail each scene and action, it was very challenging for me to picture something I had never seen before! Usually, the reader can picture whatever the author describes, but it was problematic for me to imagine a person welding in a space suit on the surface of the moon while in a special facility.

Overall, it's not a bad novel; just not what I expected. Again, it's definitely entertaining and a quick, enjoyable read, but it helps to go in knowing it's pretty similar to many of the mysteries I've read before - it's just happening on the moon! 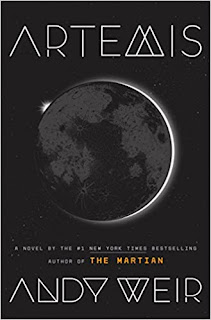