Say Nothing reads like a piece of fiction - it's made up of unreal characters and a story that is too good to be true - but, every single part of Say Nothing is from the real history detailing the many years of fighting in Northern Ireland. The Troubles as they were known, lasted from around 1968 to the late 90's (though some might argue it's still going in some ways), though it was a fairly unknown situation to me.

As you could probably gather from the rating, I really enjoyed this book! As alluded to briefly above, I really was not aware of much of the history and fighting between England and the IRA (republicans) seeking independence for Northern Ireland. Of course, I was aware there was bombings and violence but really knew nothing else. While this book is not a comprehensive story of the fighting during these 30 years, the reader certainly finishes the book feeling much more knowledgeable of the challenges that led to the conflict, why the fighting occurred, and why there is animosity still today.

While this book is not a comprehensive history of The Troubles, it is an engaging and interesting story about a missing mother with 10 kids and the main actors for the IRA side. And, like any good story, there are a few main characters who the author describes in such detail, you can't help but feel engaged and interested in their stories. These characters and the incredible lives they led/lead began many years ago when they were mere teenagers. Like many who fought the English during this time period violence was an every day part of their lives, and between their young age and daring activities, it's impossible not to be captivated by their individual stories.

This book is fascinating not only because of the individuals taking part of the micro-level, but also for how fluidly the author transitions to considering the macro aspects of the story. While much of the novel details bombings, gun fights, and prison, you never forget the bigger purpose of the book - to understand why so many Catholics sought independence from the British in Northern Ireland. In fact, as the novel continues and the reader begins to have a broader view of the issue, the author does an adroit job of pivoting much of the text to these philosophical and moral issues. As the IRA moves from a terrorist organization to a more legit political organization, the book does a phenomenal job detailing the divide that begins to split many of the original members (really the last third of the book). At the heart of this divide is about the expectations of what the struggle was about - full independence, a compromised version of peace, etc. Seeing these freedom fighters age into their 40s and 50s and become both wistful and angry about the past is one of the most interesting parts of the book.

Overall, this is one of the most engaging non-fiction reads I've encountered in a long time. As I noted at the start, the book reads like a piece of fiction, with great characters, a wonderful plot, and engaging story. I highly recommend this book! 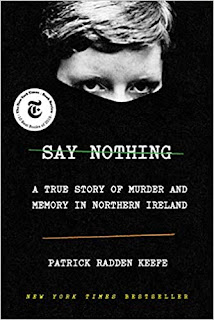