The Evening and the Morning is Ken Follett's newest book that is vaguely set up as a prequel to the amazing Pillars of the Earth (one of the few books to ever receive a 5 star rating). While there was really NO connection to Pillars or those characters, the book did include many of Follett's best storytelling skills and was an enjoyable read.

Set at the end of the Dark Ages and beginning of Middle, circa 1000, this book tells the story about three characters in England (same places as Pillars, so I guess there is that connection). A young french noblewoman coming to England for marriage, a poor but intelligent builder finding his way through a lost love, and an ambitious and caring young monk working to improve the religious focus of peoples. Though less the main focus, the book is littered with evil men (a few brothers) who these three characters fight literally and figuratively throughout the novel.

Checking in at over 900 pages, this is not a short book (and I read the old fashioned hard back - good workout!). However, the book reads quite easily and I finished it quickly. First, it is an engaging novel; one I struggled to put down on many occasions. Bridging as Follett does on being a soap opera, the novel has many highs and lows for the characters and lots of rising and falling action. Like most of his books, he does an incredible job introducing characters and making it clear their motivations. While those motivations are often quite limited and not very complex (i.e. this person is "bad" and just wants power while this person is "good" as they just want to find true love), they still are engaging and it's quite clear who to root for and against.

Perhaps my favorite aspect of Follett's books is his narration of character thinking and plotting. As I mentioned, most of his stories are about conflicts between "good" and "bad" people, and he has it play out like a chess match between the two adversaries, seeing who can make the smartest move to get what they want and watching the fireworks along the way.

The only reason this book does not earn 4.5 or 5 stars like the other books Follett has written I've reviewed, is that it lacks the depth those novels included. Again, the story is super engaging and it's a really fun read but, as a reader, I was left with wanting to know more about the motivations of the characters. It's almost been dumbed down for the reader so it's still a great read but doesn't include the complexity and varied viewpoints that elevated his previous novels. Nonetheless, I highly recommend as a read! 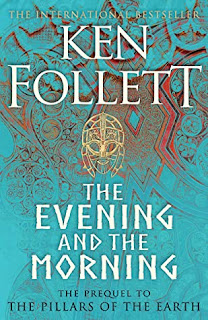