As I was reading An American Marriage, I realized it was like an inverted bell curve of entertainment (basically, a U shape). It started out very exciting and interesting, moved into a very slow middle section, and rallied again in the last few chapters. But, as that middle part didn't last too long, and did move the story along, I found this book quite enjoyable.

An American Marriage is a recently released book that became MUCH more popular after Oprah named it to her book club list; and for good reason, it's a well written and told story. Based on the author hearing a couple discuss whether the man in a relationship would have waited for the female if she had gone to prison (while he did not answer, he did say that scenario was not likely), the book is about a man going to prison right as his marriage was beginning for a crime he didn't commit. The third main character, is the childhood best friend of the female lead. Told in alternating chapters from the voice of one of these three characters, the author would slowly move the plot forward while getting the perspective of each of the characters in a chapter.

The book shined in many notable ways. First, it's an engaging story with an interesting premise (described above). Other than the middle quarter/third when the action really slowed down, the book grabs you immediately and delivers through the end. Which is another thing - great ending. As happens too often, authors struggle to pull everything together and leave the reader unsatisfied. Not here, I finished the book and felt it was a nearly perfect ending that fulfilled all the needs of the characters. Third, the characters are well rounded and easy to engage with. As the author switches perspectives often, it's effortless to fully connect with each character's motivations. Finally, the story takes on the subject of race directly and fairly. All of the characters deal with the aftermath of the injustice of the criminal system on Black individuals.

I have few gripes, with the biggest being the large section in the middle of the book when the story comes to a nearly grinding halt. The pace was moving so smoothly and then it got bogged down during the years when one of the characters was in jail. Perhaps purposeful in allowing the reader to better understand the parallel affect his incarceration had on the characters - there lives slowed too - it didn't do much for me as the reader.

Overall, I highly recommend this book. It's of decent length, is well written, has a fascinating plot and great starting and ending. The copy I read also had some interesting discussion questions after the book ended which I enjoyed engaging with to help think more deeply about themes in the story. 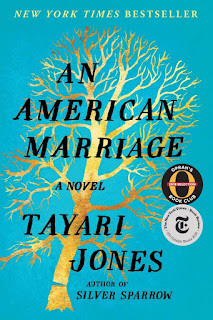