Catch and Kill is not the type of book that you look forward to reading. It's about awful human beings, most notably, Harvey Weinstein, and those that know and have hid, and continue to hide awful things. While the book was often not enjoyable to read about, it was quite interesting and I greatly appreciated Farrow's courage to put to print the many findings he learned in his research.

As most people know, Harvey Weinstein is now in jail for sexually harassing, assaulting and raping many women of his long career in the movie industry. Thanks, in large part to this book, those allegations and eventual convictions came to the public light. What was not so clear is the amount of people and organizations working diligently to ensure these wrongs never became public. It is truly astonishing to see the level of cover-up that occurred and the number of high power and profile people who came to Weinstein's defense.

While the book is revelatory, many of those findings are incredibly hard to read. Both from the level of specificity of his crimes and also the harrowing aftermath that negatively affected so many people's lives. The book adds some lightheartedness as Farrow talks about his own personal challenges in doing the research for this book. He also has a good sense of humor which he includes which allows an occasional break from the quite serious subject matter.

The biggest weakness of the book is the length and final fifth/quarter of book. Farrow basically finishes telling his findings about Weinstein about three-quarters of the way in. He then weaves through less related stories that are marginally connected to the focus of the majority book. For example, he talks about the accusations about Matt Laurer - who is also a pretty awful dude - but the depth was lacking compared to the Weinstein material. I wondered why the book didn't just conclude after he finished the items related to Weinstein.

Overall, the book is highly recommended for the importance of subject matter. While not the most entertaining book (frankly, I wanted to put it down often), hearing these stories and knowing the importance of supporting ways to stop sexual harassment, assault, etc. and the cultures that allow reprehensible behavior is vitally important. 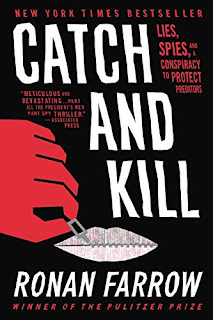