Like many people, I'm a huge fan of Jerry Seinfeld. His show is the greatest sitcom ever made (in my humble opinion), and I've always enjoyed his stand-up routines. Is This Anything is a retrospective of, I believe, every joke he has written starting with his rise to fame in the 1970s and moving to the modern day (it includes a few bits about COVID). While the book was good, it feel a little flat.

While the book also included a few pages about that status of his life prior to presenting jokes from each decade, 95% of the book was simply the telling of every routine, joke, bit, etc. he has ever thought of. The book reminded me from an important part of Adam Grant's Originals (review here) - basically, creative people produce a lot of stuff that's not useful. One of the most interesting findings Grant has about really successful inventors and people is just how much is not used. Well, this book is a testament to that theory!

And that's really a big part of the comedians process - produce as many jokes as possible, do some stand up and try them out night after night (tweaking language along the way), and then narrow down, based on audience reaction, what's the best stuff.  So, when you see any comedian, like Seinfeld, do a 45 minute stand up routine, that's pruned down from hours worth of material. Well, this book is decades worth of material that never "made it". And, as you might guess, a lot of it is not good. I mean, it's not bad; I smirked on occasion, but often, it was just not funny to me.

The other BIG problem with the book is just that; it's a book. Obviously, comedy is done best when you hear the comedian present it and see the facial expression, body movements, and hear the roar of the laughing crowd. I realized after about 10 pages of this book, I would need to at least get the audiobook. If this is not great material, it would at least help to have it delivered by someone other than my own voice! So, I did make the wise move to the audiobook, which is read by Seinfeld himself; this made a huge difference!

I'm not sure if I can truly recommend this book to all readers. I think if you're an uber fan of Seinfeld and his stuff, you will enjoy this book. Otherwise, it really is a long book to get through with some material that's not so great. Though, it will give you a great sense of how he thinks and what it takes to put together a great standup routine or sitcom. Again if you do pick it up, I strongly recommend the audiobook. My guess is Seinfeld delivers a joke better than you do! 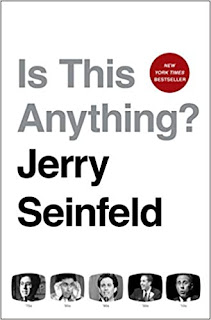