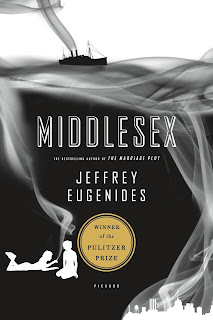 I was recommended to read Middlesex by a friend nearly 5 years ago.  Since then, I've heard other people rave about this book, and I suppose, it has to be pretty decent to win the Pulitzer.  In the end, it met most expectations but not totally.

One of the problems I have with the book is that it has two, somewhat competing, though very related, story lines.  The first, is about a family of immigrants, going back multiple generations to Greece, and eventually their lives in America (Detroit).  The other, is a story of the main character who is born a girl, but changes to be a man when older.  Yes, this is a fictional book about a hermaphrodite, which you probably want to be aware of before starting the read.

The reason I struggled a bit with the competing stories, is I felt they often were unrelated and competed for attention from the other.  I actually LOVED the first quarter of the story that tells the history of this family leaving in Greece and eventual escape (yes, escape!) from Europe to America.  Once here, I felt like the Greek history and cultural aspects, which were a large part of the novel, took away from the now more interesting story line of this person who was struggling growing up to understand his/her own biology and sexuality.  THAT story line was fascinating in the second half of the book, but again, was often hijacked by the author's need to connect back to the Greek past.

But again, the book won the Pulitzer, so may be I'm picking nits a bit too much.  As a whole, the novel is very successful and quite entertaining.  The author does a phenomenal job relating the main character to us, especially as almost all of the experiences and memories presented were when she was a child or teenager.  As I said, I very much loved the earlier chapters about this person's grandparents and found their early life in Greece, and then as immigrants in Detroit, to be as interesting, if not more than the later part of the novels around the main character.

The book was also eye-opening due to the subject matter.  To say I knew little about the life of an hermaphrodite is an understatement.  I found myself Googling some of the scientific issues that he/she was dealing with as much of the book is based in fact (and historical facts too).  In many ways, this was what I most enjoyed about the novel.  I believe that any time you can earn a better understanding of something, be it people, cultures, views, etc., the better and more fulfilling the read.  This book truly made me have a much better understanding for this group in society and better perspective on some of the challenges faced.

As you can probably guess by now, the book is very well written, with strong dialogue, rounded characters, and a few good twists and turns to keep you on your toes.  I'm sure many people better appreciate the connection between the immigrant side of the book and the struggle with gender, and so I highly recommend this book to read.  Although there are some slow parts, those are far outweighed by the fascinating plot and modern theme.
Posted by droth8um at 8:08 AM