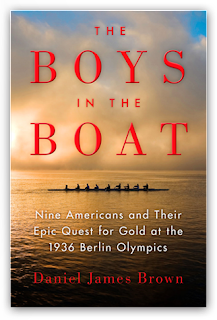 The Boys in the Boat is certainly popular right now and making it's way around various 'best of' lists lately.  As you can see from the second part of the title ("Nine Americans and Their Epic Quest for Gold at the 1936 Berlin Olympics"), it's focused on an Olympic rowing team from 1936.  Is it as good as advertised? Well, read ahead to find out.

The book basically tells two parallel stories.  One, which is in much more depth and takes up the majority of the novel, is the history and creation of the University of Washington's rowing team that competed in Germany for the '36 Olympics.  The other, less time intensive story, is about the rise of Hitler in Germany leading up to those games.   The former focus is much more interesting than the latter. In fact, I would argue that the focus on the rise of Germany was unnecessary and took away from the other story line as, to many readers, the rise of Hitler is well known history, not necessary to tell again.

The other story, about the history and creation of this incredible group of rowers, is really quite fantastic.  While there are nine  rowers on that team (and a couple of alternates), the author does a great job of really focusing on Joe, and telling his story... and what a story it is.  I won't spoil all the great details, and suggest you pick up the book, if nothing else, to learn about this great guy, but just know this his story and his hardships he had to get through were remarkable.  Not the type of person you would expect to lead a world class rowing boat.

Overall, the book is a good read.  As mentioned, the individual stories about the rowers were fantastic and only eclipsed by the parts of the novel that focused on the actual sport of rowing and creation of the boats.  Although only a minor character, my favorite was a man named George Pocock, an English transplant who was the wise old sage who also built and designed the best racing shells in the world.  His quotes, which began each chapter, and few contributions to the story, were Yoda like in delivery and importance.

I also enjoyed the story telling aspect of the book.  The author has a fine hand and the writing reads easily and enjoyably.  He also does a good a job as imaginable to describe the actual races (of which there were many).  After a while, though, it sort of seemed like he just used different synonyms to describe their race.  At some point, there are only so many ways you can detail nine people in a boat rowing as hard as possible versus others.

My biggest pet peeves include the two I already mentioned: the unnecessary telling of Hitler's rise to power (I guess to juxtapose vs. the other story) and the similar way in which most races were described.  My only other small annoyance was the level of detail with the description of certain aspects of the story that were inconsequential to the end product.  While I can understand the depth of descriptions for some of the backstories (i.e. Joe), for other things it just seemed superfluous.

Overall, this a fairly well told book and an absolutely remarkable story.  The fact that it was not brought to the national conversation until now, shows exactly how undiscovered it is.  If for nothing else, spend some time reading the story and you won't help but care more about the sport of rowing and enjoy this amazing story about overcoming hardships and finding successes against immeasurable odds.