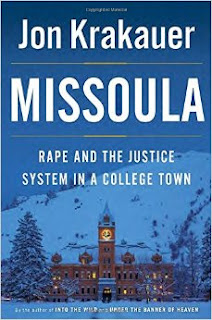 I have to confess, I'm a big Jon Krakauer fan.  If you've not read any of his previous books, you're missing out.  Coming to fame after writing about a tragic Everest climb titled Into Thin Air, he continued with Into the Wild which became a mediocre movie (though a great soundtrack), and also a great book about the Mormon faith/culture (Under the Banner of Heaven), and recently the scam that  made up the story for Three Cups of Tea. I truly enjoy his very deliberate and logical writing style and ability to take the mundane and make interesting.  Well, did Missoula hold up to my expectations?  Sort of, but not really.

Missoula is basically a book about the challenge of rape and sexual assaults that are becoming all too typical at college campuses across the country.  Specifically focusing on a few years at the University of Montana, Krakauer paints a picture of a sexualized group of young men, many who play football, whose relationships with woman are the focus of much of the story.

Overall, I didn't love the book. While he does a good job of focusing on a small cast of individuals and tries to illuminate a large problem by telling the stories, at different stages, of a few, the book struggles in many directions.  First, the stories are simply not that interesting. Sad, certainly, but the tale of relationship, then rape, then police investigation, then legal trial, then aftermath, simply aren't as entertaining as other similar tales.  Second, I feel like some of the writing as not as tight and well detailed as I remember it.  I felt like he rambled a lot and there were many areas that could have been skipped over and abbreviated.  Third, and most importantly, the book is incredibly depressing.  The stories of rape and sexual assaults are increasing yet the likelihood of any penalties for those accused is small.  In fact, by percentage it's the crime with the lowest incarceration rate for those accused.  So, basically, committing rape is the safest law to break if trying not to get caught.  Beyond that, I had no idea quite how damaging the assaults are to those involved.  Nearly always they destroy relationships and families, but by far the most saddening things I learned are the ways young woman deal with it.  They are hurt physically and emotionally.  They are scarred socially and many have long term psychological issues.  Simply, rape ruins lives in many more ways than I was aware.

I do suggest reading this book should you have an interest in learning more about the specifics of sexual assaults and the epidemic that is the college rape crisis. I learned many things that I did not know.  The cost, however, is that you have to be prepared to deal with some pretty tough material and some incredibly difficult stories about the ruining of people's lives.  In general, I really enjoy non-fiction but the down side can be that when it's sad and true, it's tough to deal with.
Posted by droth8um at 9:07 PM