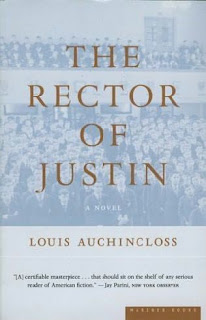 One of the surprising benefits (so far anyway...maybe because I'm not working) of having a newborn is that I have actually been able to read more than I thought. There's a lot of time to read... staying up waiting for him to go to sleep, rocking him, watching him in a swing, waiting during a feeding...it adds up. Anyway, this is good for me as a book blogger and interested reader. During the past few weeks I was able to finish the enjoyable The Rector of Justin.

As an educator, this book hit close to home as it tells the story, via diary entries, of an incredible Head of School at an extremely prestigious New England boys parochial school during the first half of the 20th century. The novel and author are apparently very famous, unbeknownst to me prior to reading the book, and it is said that it is one of the great 'school' novels ever written. I would have to say I would agree with that sentiment.

A truly rhythmical, though at time slightly challenging prose, the author writes almost poetically and with great clarity throughout the novel. At times, I would find myself rereading sentences to both assure I understood but to also appreciate a master of words. Certainly Auchincloss is a pro the craft of writing.

Besides the wonderful verse, what I enjoyed most about the novel is simply the story. Written from the perspective of six different individuals, each entry directly or indirectly tells about some part of the life of Dr. Prescott, head of Justin Martyr (the school). Through a beautiful weaving together of various entries from different time periods, by the end of the novel the reader enjoys an intimate and slightly paradoxical view of this great man. From some perspectives he represents a caring, genius who cares for all while others show him as an nonsensical monster who is driven by his ego. Nonetheless, as a reader, you can't help but respect him and feel for his incredibly driven belief in the importance of morality, religion and structures.

In the end, I could not help but question my own views regarding the overall purpose of education. Is it simply about imparting content and material? Is it predominantly about creating responsible and moral individuals? Is it more than both of those? Because this book hit so close to him coupled with the fact that it was written so eloquently and included such a great biographical story, I could not help but truly love it. I would have liked to give it 4.5 or 5 stars but it still lacked some of the 'pop' of those other books that garnered that high a grade. Alas, there are entries and chapters that are sluggish and some characters are not fully enough developed for me, but it's tough to complain with a book such as this. Overall, it really was quite good; do check it out.
Posted by droth8um at 1:32 PM