Well, it's been almost two months since my last blog and I'm a bit 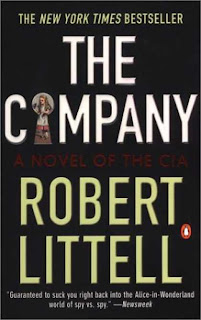 embarrassed for the long delay. In my defense, I have been getting ready for the first child (coming on Monday) and trying to get through 900 page novels. However, the last two months of reading Robert Littell's The Company has turned out to be well worth it.

The book is a pretty classic spy novel spanning over the past half century. As the title states, it is a book the spies in the CIA. I didn't love it, but I liked it. It was cool, moved quickly enough and created full and deep characters. In fact, the charecters that Littell wrote of were perhaps the most interesting part of the novel. See, the the story spans from 1945-1990ish and he tells about the characters through various time periods in history beginning with World War II. What's enjoyable is that every 200 pages or so, the author jumps forward about 10 years and moves the characters along as well. So, by the end, you've been able to follow the arc of 4-5 main character's lives... it's good stuff.

What's also great, is that the characters, though fake, are all taking part in events and activities that actually occurred in history. From the Bay of Pigs Invasion to the Hungarian Revolution to the Afghan Russian War. And, from my limited understanding of history, most of these events were treated with the realism and accuracy of a non-fiction book. He also put in real historical figures (RFK, Reagan, Khrushchev anyone?) which made the novel seem even more real.

The other part of the book I really liked was that the spying parts seemed within the realm of real life as opposed to a bunch of fake stuff you always see in spy movies. Nearly all the spies were either Russian or American and the novel is almost all about the Cold War and it's related skirmishes or events.

If I did have any complaints, it was that the novel does have some slow parts and drags out scenes. The other major knock on the book is that it IS 900 pages. I love a good story as much as the next guy, but if you are going to write for nearly 1,000 page you better have some really, really worthwhile stuff (see: Pillars of the Earth).

Overall, it is definitely worthy reading for any spy or history buffs out there as it is really written and told like a non-fiction book (and one really can't help but wonder how much really was non-fiction). The story is pretty excellent from start to end and Littell had a pretty good knack for switching to a new time period or event right when the reader is starting to get a little tired with the current period. 4 enthusiastic stars.

P.S. I am not sure when I will be able to 'drop' (that's the parlance of our times, you know?) my next blog as the child is coming on Monday. They say taking care of a baby takes some time so we'll have to see how much reading I can actually get done. Either way, I know have a somewhat legit excuse for not blogging more often. Maybe it would be easier to change this to a baby blog?????
Posted by droth8um at 3:39 PM