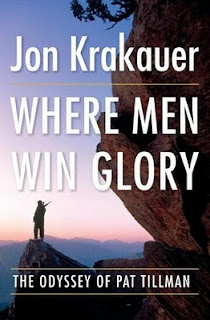 I am a huge Jon Krakauer fan (although I don't care for spelling his last name). I have enjoyed a number of his books, beginning with the incredible Into Thin Air to Into the Wild (just ok) to the highly underrated Under the Banner of Heaven. For a while now I have been looking forward to reading his newest book: Where Men Win Glory.

Well, I just finished it and it was...okay. Like Krakauer's other books, it was incredibly well written and included no wasted word. It was exceptionally researched and told in a very concise and matter of fact way. The biggest problem though was the story was not as interesting as his other novels. I know, I know, it seems hard to believe: million dollar athlete giving it all up to go fight terrorists in Iraq and Afghanistan. Great idea for a story, but the actual way it played out left a lot to be desired.

In his other novels, the greatness with the book was the actual story he decided to tell. Going up Everest when a storm comes in: amazing. Rich kid giving up all possessions to go live in Alaska: fascinating. A murder and it's connection to Mormon fundamentalism: taboo and thrilling. On the surface, the story of Pat Tillman seems as interesting as well; unfortunately, after learning about his life and eventual death, it lacks the excitement and interest of the other stories.

In what was nearly a biography for Tillman's life, this book tell his story from his childhood growing up in northern California to his eventual death by friendly fire in the mountains of Afghanistan and everything in between (you know, like becoming one of the best defensive backs in the NFL and then walking away from million dollar contracts). His life truly was fascinating. A bright, always questioning and challenging himself sort of guy, he certainly wasn't your average NFL athlete or Army soldier. His story about leaving the NFL after 9/11 to do more for his country is both courageous and patriotic and you can't help but really root for him as you learn more about him.

The reason the story isn't great though is because the best parts of it (and really the most intriguing) occur before he leaves for Iraq. His early life and amazing jump to the NFL showed an incredible, hard working side and a classical "you're too small" to make it type of story. Going to Afghanistan, being their for an incredibly short time, never seeing any real combat against the enemy and dying by friendly fire when no one else dies is beyond sad. It's tragic.

The other major part of the novel a reader should be aware of is the massive cover up of how Tillman died. Through some incredible research, the author discovers a large lie that permeated throughout the federal government and into the media after Tillman's death that stated he died fighting the Taliban makes you lament the loss of his life even greater. Perhaps because I am a seasoned veteran and well weathered conspiracy analyst I wasn't surprised by the cover up but Krakauer spends a fair part of the book going after the government and military who knowingly lied to Tillman's family and the public.

Although I lob a number of negative comments about the book, it really is a fairly well told story and great book to read. Like I said, I didn't enjoy it as much as his other books but, to me, a mediocre Krakauer is better than a lot of what's out there. Just be prepared to feel bad. Bad about the lack of story but much more so about a great guy dying far too young.
Posted by droth8um at 9:12 AM