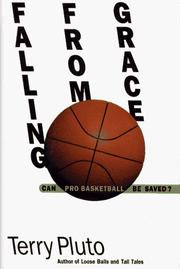 It's a bit bizarre to read a book 15 years after it was meant to be read but that's what happened to me after recently finishing Terry Pluto's Falling From Grace. At some point a couple of weeks ago, I was out of books, didn't want to head to the library and needed something to read. I checked my bookshelf assuming I had read all the books and found Falling From Grace. I've had this book for probably 15 years and assumed I read it but realized after the first few pages I had not... thus began a pretty weird experience.

A little background: the book was written in 1995 and was timely, in that most of the ideas, statistics and points made were based on very recent events. This is quite weird to read about 15 years later. Unlike some history books about events (sports, people, countries), this book was not for future digestion; rather, it was composed to be read and discussed in a very small time frame after it was completed. Thus leading to the oddity that was reading the book in 2010.

The basic premise is that the NBA circa 1995 is falling apart and all the wonderful things about it (created by Magic, Larry, MJ, etc.) are going down hill. Pluto, the definition of a curmudgeon I believe, interviews a bunch of 'old school' NBA guys and delves into the litany of problems in the NBA today (remember, 'today' is 1995).

In general, it was actually a fairly interesting book though I don't love his writing style as it's far too casual for me. What was most cool was seeing how his predictions and theories about the future were actually mostly correct. He warns about a league that will be too player centric, scoring focused and less about good fundamental basketball. For the most part, I would argue that Pluto was right on the money for nearly everything he writes. The downfall of the NBA from a 'team sports' perspective is pretty obvious.

In many ways it was kind of an interesting experience reading a book so specific in scope and time so many years later. I don't think it was the most well written book and he drags on very often and in some cases whole chapters are just straight quotes from interviews. Some of his anecdotes and stories about player behavior are pretty interesting and made the book more enjoyable.

I can't say I would recommend this book for most readers, but if you happen to have a supreme interest in the NBA and would like to read a manifesto outlining the major current problems in professional basketball 15 years prior to their occurrence, this book is for you.
Posted by droth8um at 6:32 PM