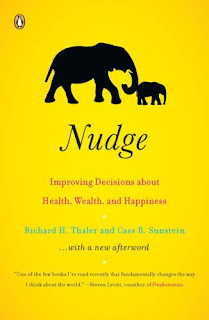 So, it's been exactly one month since my last post and things have changed. I erroneously and sillllyy (that's right, I just added an 'ly"to silly) thought that I would have more time to read with a newborn around. Oi! I know see the error of my ways. He seems to keep us pretty busy as witnessed by it taking a month to read this fairly short book. However, in my defense, part of the tardiness in completing Nudge was it's lack of umph. See, the book really wasn't that good. In fact, it was one of those books I had on my 'must read' list for a while, and I was really quite disappointed.

The book, as the title implies, is about little things that can be done to nudge people to make better decisions. The authors focus specifically on health, wealth and happiness (important stuff), and the idea behind the book is great. It is of the Gladwell and Airely ilk of quasi behavioral economics (kind of psychology + economics) and quasi political scienciey (I like this making words up thing). The big problem though is that is written by two economists. No, I don't like to put down economists just to put them down (they already have so much going against them with their calculators and geeky pocket protectors...jk), but they aren't the most exciting writers. In fact, there were times were I thought I was reading a textbook. That wouldn't be a problem if that was what I was getting into, but I thought this was a book for pleasure and would have a bit more creativity and excitement to it (to wit - the genius of Gladwell).

So, the writing was dry, boring and long at many points, and that was the biggest turnoff. In fact, it was almost painful to finish the book as the best stuff, in my opinion, was at the start. Let's talk about the good stuff.
Well, there were some good stats. Like, when going out to eat with others you eat 35% more than usual with 1 other person, 75% more with groups of 4 or more and 96% more if with more than 7 people. If trying to help people quit smoking the best way to do so is with money. People who pledged a certain amount of money to stop smoking, and would lose it if they did smoke, quit 53% more of the time than average. And, of course the best, by putting a fake fly in the bottom of a urinal, 80% less spillage occurs.

Overall, the book left me with some good summarizing ideas that might be applicable to one's own life. Specifically, when trying to nudge people remember the importance of social factors. People will often make decisions based little on economic viability and more with what others are doing. Another lesson, the default choice is incredibly important. If people are deciding something, whatever is the default is what most will go with...so make sure it's the right choice.

In general, the authors support something called libertarian paternalism which basically means liberty preserving. However, I found most of their suggestions to have a lot of "choice" already made in them. Almost always they support allowing people to choose what they would like in a situation BUT they nearly always have an option that people will automatically choose for people or has something set for them. So, although they do always have an option of free choice they nearly always want policies to be set up to help people as if they don't know what they are doing. Well, I think this is .............. great! People are stupid; those in the know should help them.

So, overall, it's not a bad book. Had I never heard of it and just picked it off the shelf to read it would have been given a higher rating. It is fairly interesting and the authors ideas I agree with and support more than most other books I read. I was just so UP for reading it and it was just written in such a boring way it was tough to give it a great rating.
Posted by droth8um at 4:41 PM