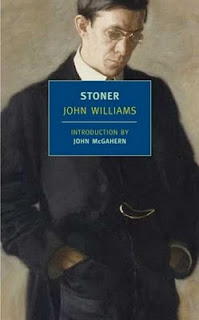 Before beginning my review of the novel Stoner by John Williams, for the sake of full disclosure, I must make you aware of how this very unknown book got on my radar. I was skimming through a Time magazine and came to an interview with Tom Hanks. I like Tom Hanks and though it might be interesting to check out what he was saying. It was mostly about his producing of The Pacific miniseries on HBO but they asked him one of his favorite novels and lo and behold he mentioned Stoner. He said he loved it and a few other nice things and that was enough for me… I mean, he’s Tom Hanks. We’ll there’s a reason that Tom Hanks is a great actor and not a great writer or literary critic.

Now, don’t get me be wrong, I enjoyed the book and thought it was good, almost very good; but to say it’s one of your favorite book ever written is a bit much. Since very few of you have probably read this book a little background: it was written in 1965 and follows the life of a man named John Stoner from his late teens through his death during the first half of the 20th century. The setting is Missouri and the book revolves around his academic life, as he served as a college Literature professor for all of his life. That’s about all you need to know about the plot.

There are many positive aspects of this novel. I love the theme and subject of the book and Stoner’s passion and love for academics. Stoner is a true romantic in many ways, though he says and does otherwise, and Williams shows this quixotic view of the main character in various ways. I loved the depth of the character developed. I mean, the author does an amazing job sculpting and layering Stoner that, by the end, you can’t help but feel you know him and care about him. The last real positive aspect of the text was the writing style. You could definitely say that Williams is a writer who never has a wasted word yet at the same times makes you aware of every necessary detail but nothing extraneous.

This is also one of the negatives of this novel. Having a shortened, concise writing style does not bother me (though it’s great to read florid, fanciful writing), but it seemed too often the author did not provide the necessary depth for other characters and settings. Perhaps this was purposeful. Dave Masters, for example, is a character introduced, described briefly and then removed from the novel in a matter of pages. He then remains one of the more referenced characters and a “friend” of Stoner to the end. I wish I would have learned of him more fully. This shortened and less than developed emphasis on other characters was an issue throughout the novel. The overall plot and rising action in the novel is a bit limited and dry as well. Nothing exceptionally exciting ever happens and Stoner’s life is grounded in reality (like every day boring life reality) for much of the novel.

Overall, the book was a bit of a disappointment. I was really expecting a beautifully crafted, fluidly written, exciting drama and it was lacking in a few of those areas. I also believe it didn’t help that I had my expectations raised to a high level (thanks a lot Tom Hanks – stick to making more Da Vinci Codes). Nonetheless, the novel does provide a beautiful and well defined character study of a man. And, in the end, who Stoner is and what he stands for is what the reader comes to enjoy about the novel. Stoner’s love for school, academics, learning, and true love is the leading themes of the book, and you can’t read the novel without appreciating those ideals.

It’s worth a read if you have some time this summer. It’s not long and you may appreciate it more than I do. Perhaps if you do, you or Tom Hanks can drop me a line and let me know what I missed.