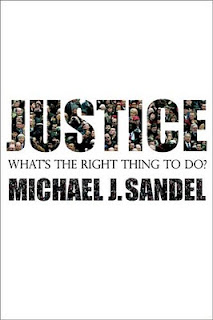 Usually when I finish a book, I look forward to putting my thoughts down and writing a review. For some reason, I have sort of dreaded finishing and writing about Michael Sandel's Justice. This is a very new book and since most readers have not read it, I will give a quick synopsis.

Sandel teaches a class at Harvard with the same name that discusses and evaluates how laws and rules are created. His book is similar. It traces some early political theories, relates them and then looks at their affect on a few modern political issues.

Overall, the book was disappointing. I was expecting this very exciting debate on major political issues but rather got a book that had 95% political philosophy and theory and 5% application. To enjoy this book you really, really have to like philosophy. I enjoy philosophy in small amounts, and I do believe the author did a great job explaining fairly difficulty political thoughts in a way even a laymen can understand. He starts with the idea of utilitarianism which basically argues for providing the greatest good to the biggest number of people. Then, he changes to libertarianism which allows for people to have as much freedom and liberty as possible; i.e. NO government influence. He then moves on to Immanuel Kant and John Rawls. The former basically supports the idea of 'moral reasoning' and allowing people to make decisions based on true, practical reason. Rawls believes people should make decisions assuming a 'veil of ignorance' which basically means to ask yourself prior to making your decision, would you make the same decision if you were not who you were (i.e. you could be poor and not rich; would you still want no redistribution of tax income?) He then goes on to Aristotle who basically argues that there is a 'correct' moral stand that people need to figure out and take.

These chapters were actually pretty good. Although a bit 'heady' (he likes to do the classic philosopher thing of 'so here is the thought but if you change this thing than it changes, but if you change this then the thought is this. That makes sense, well let's now actually look at it this way'.) his explanation of the philosophies was actually very illuminating and I enjoyed most of it. He then spent nearly a quarter of the book talking about what we owe each in a society. I really disliked this. I found it boring, with little relation to all the philosophies I spent so much time trying to understand from earlier and not applicable to anything modern.

He finished with an okay chapter about some modern issues like abortion, stem cell research and homosexuality. He made me rethink about some of those issues as he argued (correctly I would say, though you need to read the book to find out why) that if you are pro-choice or support same sex marriage you can't do it on the argument of "let people choose what they want"/liberty view.

I am not sure what else to offer to inspire or excite the reader about checking this book out. If, as I had hoped, this had been a book that clearly and eloquently explained some of the major viewpoints and political arguments of our time, that would have been awesome. Early in the book Sandel raises some simple questions like "is it okay for Michael Jordan to make millions each year and a teacher a few thousand" or "is it okay for people to gouge others on the price of gas ($11/gallon) in New Orleans after Katrina". Of course, he never provides any answers but rather (I guess) assumes you will come to your conclusion after understanding and deciding upon your own philosophy that resonates with yourself.

I do like the ending of the book. Unlike many political books, this author actually tells you his own view on things. I won't ruin it but I will give you a hint, the guy is obsessed about and wrote a whole book about philosophy, justice and morals -- he probably sort of supports that stuff.

Do check this out if any of this sounds interesting to you. It's not a long book but is a slow read because you really have to think (damn!) about what you are reading as you go through.

Stay tuned for my next review. I am pumped for reading John Williams' Stoner. Although not a hugely well known book, it's supposed to be excellent. Check it out if you like even before my review (sorry if it sucks).
Posted by droth8um at 8:55 AM