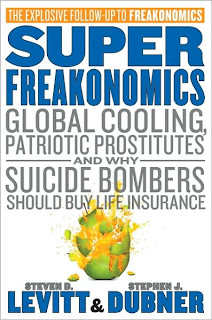 Well after taking nearly two months to finish one book (The Stand), I finished the next book in only two weeks (SuperFrekonomics). What a nice, quick, interesting read it was. In the same ilk as the Malcolm Gladwell books, and a follow up to their hugely successful Freakonomics, Levitt and Dubner follow the same pattern as their earlier books: look at a bunch of data, make some pretty amazing conclusions and throw them all together and try to find a 'theme'.

Since my last sentence pretty much summarized the whole book, I'd like to get into some of their findings. They were new, cool, out there, sometimes applicable and always interesting. Here were some of their views:
Now, to perhaps the most interesting set of conclusions (all about global warming):
With all these various conclusions, perhaps the biggest lesson of this book and their first, is that PEOPLE RESPOND TO INCENTIVES -- this is perhaps the biggest answer for all things economic (and not).

Overall, this was a great book to read if you like this sort of thing... unlike Gladwell's book it is more data driven and a bit more random in the subjects. You might also like it if you would like more depth to the 'conclusions' I provided above. Each story and background about those views is included and well written. My only complaint of the book is that most of their subjects have little to nothing to do with each other. Although they do a fairly good job of relating most issues in the same chapter to some common theme and conclusion, the book as as whole is fairly random. Nonetheless, I recommend this book to most readers. If you like the original Freakonomics, do check this one out.
Posted by droth8um at 5:21 PM