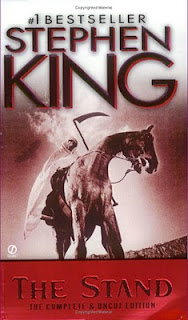 Well it's been nearly two months since my last review and blog. I wish I had a cool excuse for the long absence like traveling around the world or visiting the Moon but rather it's sort of typical: work, house stuff and other things. Perhaps the biggest reason for the two months off was that I was trying to get through the monstrous The Stand: Expanded Edition: For the First Time Complete and Uncut by Stephen King. Please note that whole title I included (which will hereafter be called just "The Stand") as it's important in my reasoning for my review score.

If you have never heard of The Stand, you probably want to talk with so more people about books. Most likely you have heard of Stephen King; well, this is one of his earliest books but for most fans of King, and other literary peeps, it's considered his best book. It doesn't have nearly as much of the typical gore and scariness of a King book and has a bit more positive themes than his other novels as well.

The novel is basically a story about a post-apocalyptic America where most people were wiped out by a super flue. The story then turns to the creation of two groups of people who are left: a 'good' group and a 'bad' group. I use quotation marks, not because the reader really can't tell which group is good or bad (King makes it quite obvious), rather, because they are never really called 'good' or 'bad'. The remainder of the novel is basically about the two groups creating their own societies and what happens to the groups.

I gave the book 3 out of 5 stars. That's probably a very low rating relative to nearly every person I spoke to about this book but let me explain why. First, and most importantly, my ratings are based on how much I enjoy the book and it keeps me interested. I'm not an English teacher, and I don't appreciate literary devices. This was certainly an 'epic' story, which I appreciate, but the use of allegory, metaphysics, a great subplot and other elements don't necessarily wow me (though The Stand certainly has all of those). At the end of the day, I judge books on how much I enjoyed reading them. Unfortunaetly, this was the biggest struggle with this novel. There were days and chapters where I had to force myself to PUT THE NOVEL DOWN. During those times the action was superb and writing so nicely done that the novel just flew by. However, more often than not, I found myself reluctant to even PICK UP THE BOOK. So much of the novel is detailed description of characters and scenes that I did not appreciate. Which leads to....

Reason #2 I did not like the book as much as others: It's soooooooooooooooooooooooo long. Now, please don't consider me a prude of long books. I have read some very long stories in my day like Pillars of the Earth and East of Eden. In fact, more often than not, the longer the book (in my experience) the better overall novel. However, as I was reading this book, I constantly was thinking to myself "man, this would be a great book if only it was edited down". Then I realized something... it was edited down. I am reading the "Expanded Edition". The original novel from 1978 was hundreds of pages less. Now I understand why they have the Expanded Edition; fans from around the world wanted to learn and get more depth on Kings characters and all of those extra pages from the 1990 Expanded Edition King had laying around his house. So perhaps other people really appreciated this extra writing but not me. To me this was very similar to watching the deleted scenes from a movie on the DVD. Have you ever done that? I have found that nearly every time I watch the deleted scenes they SUCK! There is a reason they were deleted, because they were not good enough to make the actual movie. That is how I felt with many (especially early in the novel) pages of this book.

Third reason for dislike -- nothing really ever happens. It is one of the most slow moving plots ever. This whole set of reasoning goes back to my first point about ratings: it's based on entertainment value. Although the stories of different people are very interesting and characters are wonderfully presented with diverse background and personalities; it's not until the last couple hundred of pages (out of 1150 pages) that there is any real action... before that it's just buildup.

Nonetheless, the novel is still great in some areas. The overall struggle between good and evil was excellent; specifically, seeing characters change and develop over time in different ways was excellent. I also loved the character of Glen Batemen as he constantly challenged the idea of how a society should be created and run. His often pessimistic views of organized structure and government added some great depth to the story.

In the end, I would recommend this novel to any King fan (though if you are a Stephen King fan, you probably have already read it). For others, it is worth a read and rest assured, that most people LOVE this book. As for me, I guess I just ask for too much sometimes when reading a novel that I don't want to have to force myself to read it.
Posted by droth8um at 7:47 AM