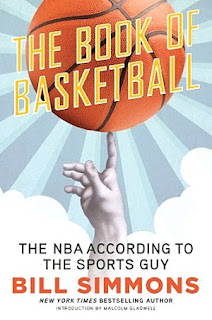 Well, only four days after LeBron James’ soon to be infamous Decision, I find it fitting that I review the aptly named The Book of Basketball by Bill Simmons. Before we get into the book, however, I must provide a quick opinion about the Decision for posterity and for future readers. I would use a footnote here (you will understand why later in the blog) but don’t think it’s possible with this blog so I will instead use my go to parenthesis:
(For those of you who are unfamiliar, the summer of 2010 will go down as the biggest free agency openings in the history of basketball. The biggest free agent (and arguably best player in the league) LeBron James waited until a couple weeks into free agency to announce his decision. Unlike another talented player Kevin Durant, who announced his decision via Twitter, James held a prime-time, hour long press conference to announce he was leaving his hometown team and going to play with two other All-stars in Miami. Without getting too preachy, the Decision was the most narcissistic, self-indulgent, ‘I am bigger than everyone else’ move in recent memory. James, a so called ‘competitor’, will be 2nd banana in Miami to Dwayne Wade and join a great team… would MJ have ever joined up with Magic to play… not unless it was against Germany. The whole thing is doomed. If they win a championship or many rings, James along with everyone else, will wonder if he could have done it himself and that ‘they were supposed to win anyway’. If they lose, which is what I must believe most of America is rooting for, than it’s a colossal waste. Either way, it will be difficult for me to root for James again).
Wow, sorry about that; needed to get that out. I recently finished a serene week on the beaches of North Carolina and finished this colossal, but highly enjoyable book all about the NBA (sorry college and ladies). The book was incredibly well done and remarkably enjoyable. Simmons, a popular writer on Espn.com, is truly an aficionado about the NBA and demonstrates a remarkable sense of humor and ease of prose throughout the book. One of the absolute best parts of the book are Simmons’ footnotes. Malcolm Galdwell, who wrote the foreword (famous for Blink, Outliers, and What the Dog Saw), writes that “Simmons is the master of the footnote”; so very true, Simmons must use hundreds of footnotes throughout the books 700 pages, but each is either very funny or a useful piece of information.
The book starts with an explanation of the origin for his passion for the game, goes into the Secret of basketball, the Wilt vs. Russell debate, a bit of history, some fun “what-ifs”, an explanation of his new “Pyramid” system to be used rather than the Hall of Fame, the list of HIS best 96 players ever, best teams ever, and the best team ever put together from the best player’s ever. He packs an unbelievable amount of NBA stuff into the book, and it was great reading all through the way. The majority of the book are his summaries of the various 96 top players careers, and I thoroughly enjoyed learning about guys who I never saw play but have been mentioned throughout history often (Big O, Petit, Rick Barry, Frazier, etc.).
What I also loved about the book was Simmons’ complete understanding of the importance of playing basketball as a team game rather than an individual sport (you can probably guess how he treats Wilt in the Russell vs. Chamberlain chapter). On p.49 he includes some wonderful quotes form Bill Bradley and Bill Russell that provide fuel to any off-season basketball coach. Adding to this, perhaps my favorite quotation in the book comes from the epilogue and Simmons’ interview with the very well respected Bill Walton who states that the key to basketball is how you answer this question: “Can you make the choice that happiness can come from someone else’s success? BEAUTIFUL. What a great way to understand the sport.
The only drawback of the book, and what kept it from the coveted 5/5 rating, was that, although incredibly entertaining and a joy to read, it didn’t have the necessary depth and long lasting power of some of the other books I have reviewed (Godfather, Pillars, etc.). At the end of the day (or review), most of the book is about Simmons’ own views about fictional ideas and things he has created. The “Pantheon” of players, the blowing up of the Hall of Fame, and the highly anticipated basketball game against the aliens are funny to read about and great intellectual exercises but don’t have a lot of realism behind them. Likewise, I believe he has already changed his Top 96 Pyramid list a few times and the book is still in hardcover so I don’t think it will really last the test of time (or test of a year).
Nonetheless, I truly enjoyed reading every word of his book, and if you have any interest in basketball, I would highly recommend it to you. Being a person who loves the NBA and its history this book was a real swish (Holy God! Worst basketball joke ever).
Posted by droth8um at 9:43 AM