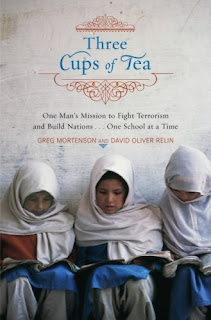 Currently, there is a great deal of buzz and excitement about David Oliver Relin’s story of Greg Mortenson told in Three Cups of Tea . It is a national bestseller and has begun to receive a cult like following in educational circles. Due to the overwhelmingly strong support of this book by nearly everyone, I felt it was definitely worth a read.

If you are not familiar with the story, the book is basically a retelling of the last 10 years of Mortenson’s life as he attempts to create schools in Pakistan and now Afghanistan. The book is written entirely by Relin but Mortenson’s life and memories are what fill each chapter and move forward the story.

Overall, the hype is worth it; the book is very good. Like many things that become incredibly accepted in American pop culture, it is well worth checking out. (Side note -- This may sound incredibly obvious but recently it dawned on me that whatever it is that ‘America’ as a whole supports in pop culture, and sort of comes out of nowhere, is almost always worth the hype. Some recent examples: Slumdog Millionaire – no one ever heard of it, then everyone saw it, ridiculously good; Da Vinci Code – awesome; Kanye West – I thought just another rapper, until I listened, again incredibly good. Anyway, you get the idea, this book falls into that category). The book’s story is incredibly touching, and the whole idea that the most effective way to fight terrorism is through education and children is obviously inspiring to any reader (perhaps more so to teachers).

I will probably get chastised for not giving the book 4.5 or 5 stars by some but let me explain. First, in general, I do not have a huge interest in foreign countries, and I especially find Asia to be uninteresting (this is totally subjective and I understand I am Euro/Western-centric). Second, I was frustrated with the lack of ‘results’ or even details about the future of the students of these schools. So much of the book premise is that making schools in these areas by themselves is the answer. I don’t quite agree. What are the graduates of these schools doing? Obviously if the alternative is the Tailban, the school is far superior but if they are simply learning about medicine and never returning to help their village and local people, what use is that? (I will answer my own question here as Mortenson and CAI (Central Asia Institute) try to educate girls, as they are far more likely to return and help the local village). Third, the book is often confusing. The number of varied names of places and people is incredibly overwhelming, and its difficult not to get lost from time to time try to keep up with who each person is.

With all that being said, the greatness of the story (less so the book) is the simple way Mortenson and CAI are helping to change the world. One of the best messages in the story is that the stereotypes that are so prevalent in our media and our culture about Pakistani and Afghanis are so off based. Think of it this way, if you assume that all or most people in this area are terrorists or support terrorists, than you should be okay with everyone in that area assuming you voted for George W. Bush and/or support all of his policies. Prior to the election, few Americans supported Bush’s military policies just as an incredible few in that area supported the Taliban and currently support terrorism. Most are similar to Americans: they have a core set of moral values, believe in helping others and think education can solve many problems.

Perhaps the most saddening and incredibly difficult problems stems from one major issue. As Mortenson visited some American Pentagon workers, they asked to help him by providing money. His response was “I realized my credibility in that part of the world depended on me not being associated with the American government, especially its military.” What incredibly ironic and difficult position. This is one of the major problems with the current world and America’s position. In many ways, this makes Mortenson’s work even more important.

Regardless of your view of foreign policy, wars, and education, check this book out. You may not like it; heck, you may think Mortenson’s ideas are the biggest waste of time and money but I promise you’ll be moved to have a far more defined view about foreign education, America's palce in the world, and terrorism.