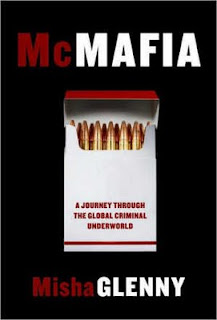 So I am a quasi member of a book club. The book club is actually quite fine but I dub myself a 'quasi' member having only attended two meetings in the past six years. The books are predominantly either from the political science or international affairs ilk and this is my second blog about a book from that club (the first blog).

In the past few weeks, I have spent some time getting through the behemoth that is McMafia. It's not so much the length of the book (only about 350 pages) but rather the large and long pages that contain next to no dialogue (which greatly increases the length of the book) and the seemingly endless slew of foreign names and cities that are mentioned that made it a difficult book to plow through. Nonetheless, I got through it and was happy I did so as it was an illuminating, if not slightly depressing, view of our current global world.

As you might be able to ascertain from the title, the book is about the growth of worldwide crime in connection with development of globalization. In general, the book is not so uplifting and pretty much scared the hell out of me. Glenny spends most of the book explaining the litany of criminal problems in a collection of countries around the world. While doing so, he talks about the great diversity of crimes that are occurring worldwide that include: drugs, prostitution, cybercrime, theft, labor trade, etc. For the most part, his writing is crisp and the books high points occur when he shares the intimate details and personal stories from people connected and affected by global crime around the world.

There were a few interesting items I gleaned from the text that are worth sharing. First, the rise in global crime has a number of causes with perhaps none more critical than the fall of the Soviet Union. Additionally, the huge rise of wealth in Western Europe and the proclivity for the people of these cultures to want very cheap goods and often ilicit items is hugely important. As Gleny nicely puts it, "Organized crime is such a rewarding industry in the Balkans because ordinary West Europeans send an ever-burgeoning amount of their spare time and money sleep with prostitutes; smoking untaxed cigarettes; snorting coke through fifty-euro notes up their noses; employing illegal untaxed immigration labor on subsistence wages; stuffing their gullets with caviar and admiring ivory and sitting on teak." Second, SO much of the illicit trade that occurs is either connected or related to licit trading that it is incredibly difficult to determine the line between the two. Likewise, most criminal organization have a hand in many, many legal and illegal businesses. The yakuza in Japan, for example, have become an institutionalized element in society. Third, so many governments of countries around the world allow illegal elements, or, in some cases, are part of the criminal underworld (Nigeria, much of Eastern Europe and Southeast Asia, for example). This in turn creates a major issue for Westernized countries as they ask these countries to curb corruption and strengthen the rule of law which they are often unwilling to do. On the other hand, the West plays a part in the rise of criminalization and needs to reassess its resistance to free labor and protectionist practices.

Overall, the book is a bit difficult to get through and will certainly make you look at the world and even YOUR own role in it (yes, each of us actually plays a part in the rise of the global criminal world). Perhaps the most uplifting thing I took away from the book (if you can call it that), is that I feel incredibly lucky to be an American. He goes from country to country demonstrating ways crime is a regular part of everyday life, and he does not paint an uplifting picture. So, if you want to undertake a meaty, detailed, richly told story about global crime in the world, this is the book for you!
Posted by droth8um at 3:53 PM