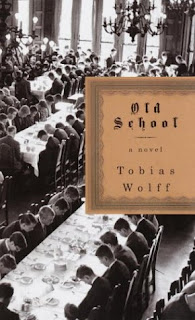 Recently, I was in this ridiculously cool used bookstore in Saratoga, NY. The place is awesome; it goes from room to room, seemingly never ending. It’s in a basement, and is dark, dank and fairly spooky. Anyway, I picked up a couple of cool books there and one was Old School by Tobias Wolff. I had recognized it because I saw it at Borders less than a week before for three times the price, and it’s a bestseller, so I thought it was worth picking up. I was not disappointed.

The book was a school teacher’s dream; a story about students who were passionately interested in school and put the literary competition held each year as the pinnacle of academic pursuits (the story was based in the 1960s, so it seems a bit more believable). The book is told from the first person point of view of one of the students. He sort of reminds me a bit of a smarter, saner Holden Caulfield.

Overall, I thoroughly enjoyed the novel. Although quite short, the story told was fascinating, characters interesting and dialogue and writing exemplary. The writing sort of reminded me of Hemmingway in some ways (who, along with some other famous authors, is a featured character in the story), as it was simple and to the point but many passages held far deeper meanings.

There were some negative aspects that prevented it from garnering a higher rating. Primarily, the story does not flow as well as one likes. This is especially true of the final chapters. Apparently the author had submitted some of the chapters as short stories to the New Yorker prior to completing the full novel. Near the end of the book, one feels as if each chapter is a separate vignette rather than a fully completed novel.

I would strongly recommend this book to all readers. Besides being short, you can finish it in a few days, it is easy to read and the moral/question of truth and honesty, which is at the heart of the novel, is easy for anyone to identify. Now if only all current students in America could have the same passion and interest in academics as the characters in this book…oh, to dream.