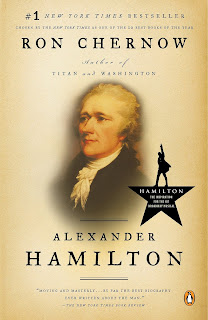 I would assume that I am part of a majority of people that have read this book in the past three years for one reason - I went and saw Hamilton the musical and became much more interested about Hamilton's life and learning more about the star of the show. As Miranda used this book as the basis for the musical, I figured it would be similar to the musical in enjoyment and entertainment. I was a bit wrong.

Chernow's Hamilton is a book. This is obvious, but really, the key difference. Further, it's a really academic book. By that I mean, it comes in over 800 pages, is beyond detailed in its inclusion of material, is well sourced, and written with more than a few words that made me grab my dictionary. It's also a fascinating tale about, perhaps, the most impressive and unknown of the Founding Fathers.

I don't think this book would be nearly as interesting and well read if not for the musical. I'm sure I would have never picked it up without having a background, provided by the musical, but one that is not full or as detailed as my inquiring mind was hoping. One major difference is the lack of focus on Burr in the novel. Really a side character until the duel at the end, he was such a large part of the musical production. Similarly, I was hoping there would be more about Hamilton's relationship with his sister-in-law; who Miranda presents as a type of love interest in the musical. In real life, it wasn't quite as intense as the musical made it.

One thing that really is quite amazing is how detailed and, from what I can tell, accurate Chernow's book is. Although he primarily only utilized letters and documents left from that time, it must have been a painstaking and timely process to find (no easy task) and go through all of these writings. One element in his favor is the voluminous writing style of Hamilton. Luckily, by the time he is living in America, he is a prolific writer than describes most elements of his life. I believe Chernow's biggest challenge was trying to learn about Hamilton's life until 18. Growing up in Nevis, in the Caribbean, there was little information written about him or that he wrote. Nonetheless, he does a fine job painting a clear portrait of Hamilton's early life.

As a whole, the book is as clear and detailed about Hamilton as one could hope. Really, every important episode of his life is clearly explained (and some less important too). Certainly, all the interesting parts of the musical are provided depth too. However, the book simply can't compare the musical; and nor should it. However, as a person who subconsciously or not was hoping for something similar, the book just couldn't entertain me in the same way. It's still a log, trudging read but necessary for anyone truly interested in learning all about Hamilton's life.
Posted by droth8um at 4:59 PM