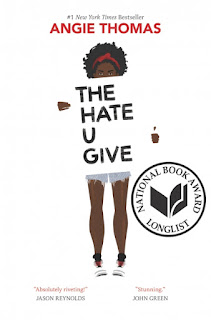 One of the pleasures of my job, is working with people who put me onto things that I might not otherwise encounter or check out. This is the case of The Hate U Give.

This book was certainly not on my radar for a couple reasons. Primarily, it a YA (Young Adult) novel and I don't usually read much YA as I'm often not a huge fun of how those types of books are written/stories told (though I did give a shot with Wonder a few years ago). Second, the protagonist is not someone I would have a lot of connections with; she is an African-American high school student from a low socioeconomic area.

Thankfully, these two reasons why I might not have checked out this book were outweighed by the excellent reviews by those who have checked this out. And, as I learned more about the plot, I realized it was certainly worth my time. As for that plot -- the book begins with the main character witnessing a childhood friend (black) killed by a police officer (white). The book then follows the struggle of the protagonist as she was the only witness to this; to complicate, she attends a very white, independent school (with white boyfriend). All of this challenges her as she often feels pulled between two different cultures and parts of her life.

My only real complaint with the book is that it's written as YA fiction. While there is nothing inherently wrong with that, I did find that author would often over explain and/or hit the reader over the head with whatever point she was attempting to make. Additionally, as it's a first person novel written from the place of a 15 year old girl, much of the specifics about her life were hard to me to relate (it's hard being an old white guy!).

Reading diverse books is a great goal for any reader. While I'm open to doing so, I still want to read books of great interest and entertainment to me. With the Hate U Give, I was so pleased it was able to meet both goals. Although it may not have been quite as captivating/interesting as some of the other books I read (mostly due to the YA writing style), it did provide much more awareness into ideas, cultures, and thoughts that are often not common to me. I do recommend this book for any interested reader!
Posted by droth8um at 7:09 PM