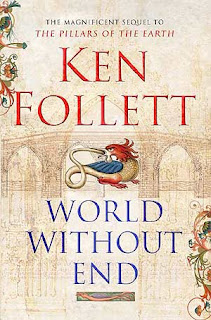 It has been almost 9 years ago to the day since I reviewed Follett's masterpiece Pillars of the Earth. What a great book, and one of the very few that has earned 5 stars on this blog! While I'm not sure why it took me nearly a decade to read the sequel, World Without End, I am quite happy it did come back in front of me (literally, it was being given away on a table as I was putting together my lunch!).  Did it equal it's predecessor? Not quite, but pretty darn close.

If you are not aware of these two books, you should be. While they are dated over a half a millennium ago, the stories are simply fascinating. I'm not a huge fan of this historical time (knights, castles, religious leaders, church building, plague, etc.), but due to Follett's excellent character development and story telling, one can't help but be intrigued and entertained by these books. A word of caution, both come in over a thousand pages, but due to the addicting nature of the story, they are easy to connect with and push through.

What I also enjoy about both of these stories is the varied timing of people's story arc. Both of these books are really about individuals. Often, very "normal" people who were not necessarily born into privilege who make great things of their lives, while battling others (who, are more or less "evil" (yeah, it's a pretty typical good guy/gal vs. bad guy/gal narrative - but it works!)). I really am fascinated by what goes in people's total lives, and Follett does a great job of telling each person's story from their childhood through middle/old age or death. It makes for a fulfilling read.

While I thoroughly enjoyed the book, hence the 4.5 star rating, it was still not quite as strong as the original. First, the story was pretty much a straight copy of the first in many directions. And while this is great, as the first was awesome, it certainly loses some originality points. Second, while the characters are still very well rounded and easy to root for, they were not quite as compelling as those in the first book. Third, this book had a couple of dry spots that went on a bit too long and were harder to push through than the first.

Overall, this book was still incredibly compelling and very entertaining to read. I couldn't put it down for long periods of time and nearly always looked forward to getting back to it. And not just near the end, there are many cliffhangers throughout that kept me engaged while reading. Again, if you have not read either of these, clearly you should start with the first (and slightly better), Pillars of the Earth. If you haven't read the sequel, I strongly urge you to do so as well. While it was worth the wait, I wish I would have read sooner than a decade later!