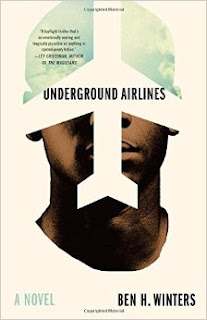 Underground Airlines is one of the more interesting plot set-ups I've read in a while. It probably falls under the genre of "revisionist" or "alternate" history but reads more like a sci-fi novel in certain parts. The basic premise: after the Civil War the South is allowed to keep four permanent slave states which exist into modern day, the time period from which the novel is told. So, was this new spin on history any good? Well, for the most part the strongest part was the set-up; the follow through could have been improved.

I really enjoyed reading this novel though the first half seemed more interesting and exciting than the second, which is odd. I loved learning more about how the current USA was allowed to have four states that legally could allow slavery. In many ways it's a dystopian novel. What's fascinating about it is all the aspects of slavery that exist in modern times with all the modern technology. To say it's a bit scary to think about, is an understatement.

The biggest area this novel struggled is actually pulling all of the plot pieces together. The story is based on a black man who is now an escaped slave catcher in the norther states; apparently a real problem in the dystopian setting of the novel. While the first half is very strong in setting up the conflict and rounding out most characters, I found the author failed to follow through at the same level of intrigue as the novel continued. While he tried to add more action, I felt like much of it fell flat compared to some of the set-up of the first half. Odd, I know, but true.

Overall, I would recommend this novel. It's a pretty fascinating idea and certainly keeps your attention throughout. While there is some lag in the second half as the author seems to be out of his comfort zone pushing an action novel, there is certainly enough there to make you keep up and you do feel a certain level of interest in learning the fates of the key characters.