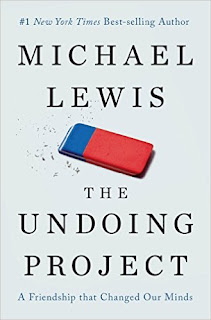 I really struggled trying to figure out how many starts to give Michael Lewis' new book The Undoing Project. When I heard it was coming out a few months ago, I got very excited, which probably raised my expectations much too high. I finished it about a week ago and had it at lower than a 4 but in the past week, I've thought more about it, and it's moved back up. Let's get into why.

A little bit of background to help explain: this book is about two incredibly influential, but fairly unknown psychologists named Daniel Kahneman and Amos Tversky. A few years ago, I started reading a number of books about behavioral economics (Predictably Irrational, Nudge, and others). Basically, these two guys help create and make famous this new way of looking at decision making. If you are not a familiar with it, definitely check out this book. Basically, behavioral economics takes on normal economics, which assumes that each person acts logically, and puts a human overlay on it, which, study after study shows, people are not at all logical with money or decision making. In fact, they are often illogical. So, I've been really interested in this for the last few years and read Kahneman's comprehensive book, Thinking, Fast and Slow, a few years ago. Frankly, that book is fantastic and probably should have earned higher than 4 starts. When I heard that Michael Lewis, an author I usually enjoy reading (save the atrocious, Home Game) was writing about these two titans, I was very excited.

Now to the problem, it's not actually the most exciting book. I'm not sure if my expectations were just too high, I knew too much already so most of this was not new, or if it's simply not a great book, but I really did not enjoy as much as I would have thought. I had two major problems. First, I was hoping to get more about the relationship between the two. Basically, it was one of the greatest partnerships in history, to the point neither actually could tell where the ideas were coming from at their peak. And while Lewis does a noble job at trying to detail their relationship, I never really felt it the way I was hoping.  He describes it in so many different ways but it still fell flat in truly adding clarity to the emotional part. Second, while he cherry picked some of the most interesting and noteworthy projects/studies they did, I had heard many of them before. The experiments are very interesting, but I thought he also did a poor job explaining just how far-reaching their research had become in the modern era.

So why did it end up with 4 stars? Because I have to think about the average reader who has never heard about Kahneman or Tversky, which is most of you! As this will be your first foray into behavioral economics, it could be a lot worst. In fact, the one added benefit of this book is that you get biographies (which truly is interesting) of these two fascinating scientists. However, if you want to get into a more meaty and thorough read and understanding of behavioral economics, then cut out the middle man and go straight to Kahneman's Thinking, Fast and Slow!  Either way, pick one of them up so you can at least understand all the poor decision making you currently are doing!
Posted by droth8um at 2:49 PM