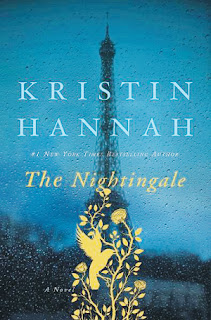 So, here's something crazy about Kristin Hannah's The Nightingale, if you click on the link in this sentence, you go to Amazon. There, you can see this book, as of this writing, has been reviewed 26,268 times and has averaged 5 stars. That's literally the highest rating a book can earn on Amazon. For the most part, I have to agree with all those fans though I don't think it's a 5 star caliber book in my mind.

To be clear, this is a very entertaining book that I enjoyed immensely. A quick summary: World War II, France, two sisters who have very different lives and struggle to connect with each other, have parallel stories that inevitably end up being quite sad. In addition, a future character is recounting all of this in a modern time as she returns to Paris for a remembrance celebration.

Overall, the book is a breeze to read and a pretty enjoyable novel. Do note that it gets fairly depressing as the story goes and the war gets worst though. Having never read a Kristin Hannah novel before, I did enjoy the storytelling and dialogue immensely. I also think she did a very nice job of rounding out the characters and making you identify and feel for each of them (including the "bad guys").

While I did read this book quickly and had difficulty putting it down (it really did have a fairly suspenseful plot), I struggled with a couple of small elements that knocked it down from 5 stars. To begin with, it is a fairly sad novel. I really don't like reading/learning about war/death and I once again was reminded of that again as the focus on the Holocaust in the final third of the novel was tough. I also found a few of what I would have considered, the bigger dramatic parts, a bit too glossed over. There were two specific "major" moments in the book that I though the author did a poor job of describing and did so quickly. While I like the breeziness for most of the scenes in the novel, spending a bit more time around the large events would have been worth the time. Finally, I found a few of the love parts a bit sappy. Don't get me wrong, I like a good love story, but, to me, some of it seemed a bit contrived and a few of the lines read to me a like a bad romance novel (or a good one, I don't really know the difference).

Please don't let that last paragraph skew you to think you should skip this book. I mean, 26,000 people can't be wrong, right? While I did have a few small issues, I do think this book is really quite good and one of the better stories I've read in a while. Top it off with some very easily to connect with characters and add some great dialogue and you get one good novel!