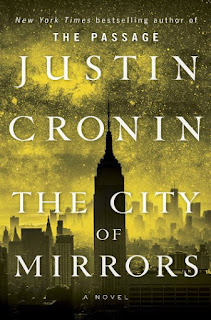 About 3 years ago, I read an absolutely superb book, and one of a very small and select few that has earned 5 stars on this blog. It was titled The Passage, and I reviewed it and it's sequel, The Twelve, here and here, respectively. When I finished The Twelve, I read there was a final book in the trilogy coming out sometime in the Spring of 2016.  This was a few years ago and I pretty much forgot about it until about a month ago when I was looking for a book to read and checked the NY Times bestseller list. Wouldn't you know, Justin Cronin's, final book in the trilogy, The City of Mirrors was number 1? What a very, very welcome surprise. Well, did it live up to the first? Not quite but it sure beat the sequel.

Quickly, the basic synopsis of the series: a set of core story characters are living in a post-apocalyptic America after a virus nearly killed off everyone. The virus has led to a set of, basically vampires, that rule the land at night. The books jump around by timeline, in some cases by millennium, as the reader learns more about both the main characters and the viruses affect upon the world, past and present.

This book concludes The Passage trilogy. Coming in at over 2,000 pages between the three, the author does a pretty fantastic job weaving them all together while also going into sufficient, and welcome depth, to better understand all the core characters, including motives and what ends up happening to them. This book is about all you could ask for to conclude this series, as the scope of the story and depth in which the author had described many prior events/characters was going to be hard to fully wrap-up.

For the most part, the book is very entertaining (which is the main criteria for my rating system). I thoroughly enjoy Cronin's style whereby he will have great description of important plot developments and action and then take full chapters to go into depth to describe a scene or person in the novel. It's a great way to both feel like you really know and understand the characters but don't get bogged down on items unrelated to the story. At one point, Cronin really takes a detour and basically includes a 100 page novella early in the book about an older character that hadn't really been detailed yet.

My biggest complaint about this final installment is the slowness to get the action going. Like other epic tales of fictional apocalypses, this has a classic good guy (or girl)/bad guy scenario. You know that eventually, they are going to square off, and it was pretty clear that the book was setting up to do that; I just didn't think it would take so long to get to. It seemed like at least half the novel just setting things up. Don't get me wrong, I enjoyed that half and Cronin does such a good job of rounding out the scenes that it's hard not to enjoy, but it just felt so obvious that the book was slowed down. However, once things to start going, it's a furious final quarter of the novel. I even liked the final chapter and how the entire trilogy was pulled together.

Overall, if you have not read The Passage, I would highly recommend you do so soon. Please know that even though the books have a vampire element and are apocalyptic, they are really phenomenal reads and really are just vehicles for fantastic storytelling . I would also suggest that if you read The Passage and got frustrated with The Twelve, you owe yourself the reading of the City of Mirrors partly to understand how the story ends and because Cronin is much more on his game in this final book.