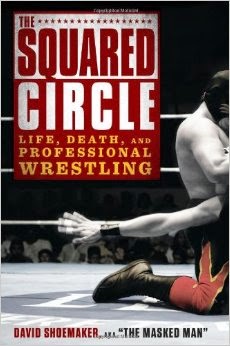 I have a confession: I loved watching wrestling growing up.  To be clear, this is not legit, Greco-Roman real wrestling; this is WWF fake wrastlin'.  So, when I saw a highly rated book about the history of wrestling titled The Squared Circle, I figured I should give it a try.  Boy was I happy I did; the nostalgia oozed from the pages.

When I was young I was super into watching WWF.  It had just started to hit it big culturally and a guy named Hulk Hogan had just come into the national conversation.  While only a little guy, I got into for probably a decade starting in the mid-80s and had action figures, championship belts, and even wrestling bed sheets.  This book was a real fun read.  I probably remembered about 2/3rds of it and the other 1/3rd (either older stuff or some of the newer people) was pretty interesting to me.

The book has a pretty fun set up.  Basically, Shoemaker goes through the various eras from the start of wrestling in America nearly 100 years ago to today.  While going through, he does 4-5 page biographies of about 30 wrestlers.  I didn't realize until the end that they were all dead (a completely noteworthy and sad part of the overall wrestling narrative).  In the arc of the book, I truly enjoyed the middle 2/3rds as that was the era, and wrestlers, I remember quite well.  Interestingly, the author avoids many of the major stars (though many are represented) and, instead, emphasizes some less popular wrestlers that stood out for some specific reason.  Again, really quite interesting.

Drawbacks?  Sure, there were some.  I thought there was too much on the beginning of the sport. Nearly all those wrestlers are unknown and the sport was so different then.  I also didn't like how the book didn't include better visuals.  While there was a black and white photo over each wrestler covered, that was it.  If there was ever a book that would have been improved by a giant, color insert in the middle, it was this one.  While I appreciate that the author wanted to make it clear that 'kayfabe' is an integral part of wrestling (kayfabe is the rule that wrestlers always stay in character but occasionally gets broken), there was a lot of emphasis about how obvious it is to everyone that wrestling is fake and that's okay and actually a very important part of the overall sport.

Overall, this is a pretty enjoyable book if you enjoy wrestling.  If you are like me and grew up watching guys like Macho Man, Hogan, Jake the Snake, and Andre the Giant, take a read through this book.  While you may find yourself flipping through some of the early stuff, you also might find yourself pulling up old YouTube clips of matches from two decades ago.  Certainly this is not as good as a time machine, this book still did a pretty great job of bringing up the memories in my head.  Hopefully, it does for you as well!
Posted by droth8um at 8:51 PM