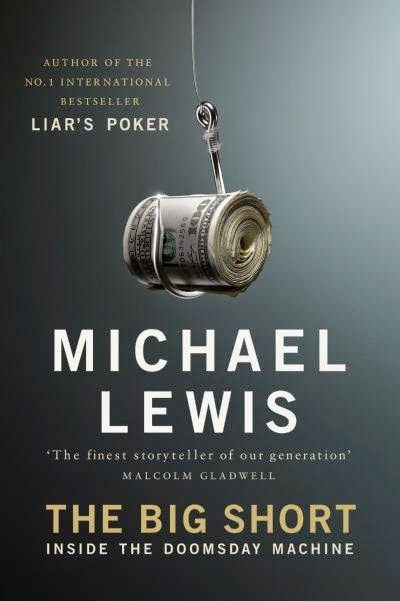 I think this is one of the stranger reviews and ratings I've done for a book.  It's safe to say that this is one of the most enjoyable books about something I did not understand.  In fact, I loved the book but again, didn't know what I was reading about half the time.  Alas, The Big Short is really worth the time if you are okay with you brain feeling a bit overwhelmed for much of it.

A bit of background, Michael Lewis is a pretty great author who wrote Moneyball, The Blind Side, and the original tale of Wall Street, Liar's Poker.  This book is sort of a take 2 on Liar's Poker.  It basically tells the story about the growth and eventual downfall of the housing crisis in the late 2000's.  To be even more clear, the book goes includes stories about a very small pool of people that were making systematic bets against the growth of the housing market.  These bets are calling 'shorting', hence the title, and can have great odds if they work out.  The final piece of info.: you make these bets against the housing market by buying collateralized debt obligations (or large numbers of mortgages put together into bonds).  Anyway, long summary short, Lewis walks you through how the housing book became so big, why no one was stopping it, why it was so easy to game (for the big banks), why those who bet against it were quite genius, and why, in the end, was it so sad for our society and country.

The reason the book is so enjoyable, and earns such a high rating, relates to what I was joking about in the first paragraph.  What actually occurred was incredibly complex and confusing, and yet without even truly understand it, the reader (ME!) still gets a really good idea of what was happening and how absolutely crazy it was.  In some ways, it's kind of like a mystery novel, though with the ending already known.

Lewis does a great job of explaining why the banking machine was going so hard, so fast, and no one was asking questions and why the few that were asking questions were such outliers.  It also gave me such an amazing sense of the pressures of money on so many industries and especially on Wall Street.  The characters were also pretty fascinating.  While he doesn't go into great depth about them, he does describe about a dozen people that were absolutely critical in the process to short these companies and their investments in the housing market.

My only real complaint of the book (besides not actually understanding much of it) was that Lewis did not  explain the aftermath of many of the banks going belly up.  Although he writes briefly about the government step-ins and taking over of Freddie and Fannie, that's about it.  And though he does make it quite clear that there was huge mistakes in oversight by the government (e.g. Moody's which sets the 'ratings' for many of the collateralize mortgages, didn't know what they were doing and employed the meekest financial minds), you never really get a sense whose fault this is. He does mention how ridiculous it is that so many CEO's and VP's were highly compensated after losing millions of dollars, but I would have liked a final chapter explaining how to assure this never happens again.

Overall, it is a great story that is very well told and very illuminating.  You really get to better understand one of the largest black eye's in American financial history.  If you don't mind skipping over some things that just don't make sense to you, you're in for a real treat.
Posted by droth8um at 2:45 PM