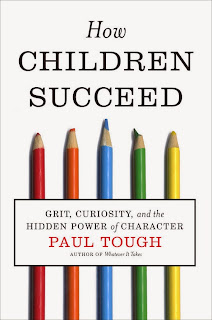 I try not to read too many education books during my free reading time.  As I do it for a living, it's nice to have a get a way sometimes as I spend time with it all day long.  So, when I do read education focused books, those that are written in a 'non-academic' way, are the easiest to get through.  Those that are also quite interesting are a big bonus.  So, Paul Tough's How Children Succeed was a pleasure it was an easy and fascinating text.

The subtitle of this book is "Grit, Curiosity, and the Hidden Power of Character", you can probably gather that the main focus of the book is the author's claim that how much effort a students put into school is the most important element of success.  This goes counter to what many believe, as most think student's IQ and intelligence is the main determinant of future well being.  Needless to say, I truly enjoyed the idea behind his premise and believe in it fully.

The book is a quick, easy read and he does a fine job of relating a variety of anecdotal and data drive information to prove a variety of points.  Written in a "Gladwellesque" style, the reader goes from chapter to chapter being told interesting story after interesting story all to make certain points clearer and more easy to believe.

While I think Tough's major push in the book was to get a wide audience to read the book in a bigger context of looking at students in a whole in our educational system, he really does a bait and switch as his true goal is to make the reader aware of his biggest area of interest: poor students in under performing schools.  Don't get me wrong, I still think it's a great book and well argued, but the major case he is making are for specific ways we could change the system to make massive saves of a consistently under performing, and often forget about, group.  He reminds me a lot of Jonathan Kozol, for you fans of him.

No real drawbacks besides the fact that the book does not fully deliver on the expectation of the title.  Additionally, it does kind of get bogged down in some areas and I don't think he hammers home his points as well as possible.  Also, as I judge mostly on entertainment value, this book does pretty well but it's still a book about education, albeit, an awfully good one that I urge you to read even if you are not an educator as it gives you great insights into why people are successful.
Posted by droth8um at 4:45 PM