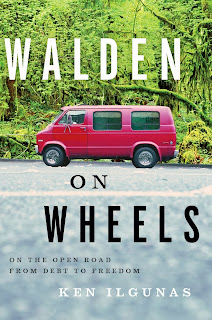 Lately, I have been reading far more books on my Kindle than on paper.  Usually, I borrow them from Arlington or Montgomery County.  You can't get new releases very easily but any older books, it is a quick and FREE download.  So, when I saw the newly released Walden on Wheels  on Kindle for only $4, I thought it was certainly worth the download.  I now know why it's only $4... at best, that's its value.

You should understand the premise: some kid in graduate school decides he can't stand having any student debt so he decides to live in a van during his time in school.  There is an implicit and explicit kinship with Thoreau's Walden, hence the name of the book.

Overall, the book is, OK.  It's not awful, but is also not very good.  It starts with a very exciting entry of this dude in his van about to potentially be found out by the cops while on campus.  The book then sprawls in to the next couple hundred pages of the back story that brought him to that point.  I remember this specifically as I was at the 66% notification on my Kindle when the book finally got back to the point at which it started.  That first 66% of the book is a bit rough.  Stories about this guy's lust for the wilderness, living differently, and issues with society litter most of the novel.  While you might appreciate his view on life, it gets old after a while and his constant stories about returning to Alaska (which I think he did for, what felt like, every summer of his life) wore after a while.

The good parts were the last third of the book for sure, along with a fairly informal and enjoyable writing style.  You do, sort of, feel for the protagonist and friend's plight as many had a similar one.  Go to college with no real goal, go into massive debt, finish college and have no real way to pay off debt or utilize degree earned.  Unlike the author and buddy though, I never felt the need to 'fight' society for all of it's ills and assure I go against the system.  While I appreciate freedom (truly, the ultimate goal of the author), it's not worth the cost of security and assurance of safety.

In general, the book is probably worth the $4 price tag.  It's sort of a novel idea, fairly interesting, and not the worst piece of writing.  However, it's certainly not a great read and you have to really enjoy the philosophies put forth of the author as they are fairly pervasive and make up the large amount of the novel whenever the reader begins to question why in god's name does he live in a van?  Enjoy!
Posted by droth8um at 2:36 PM