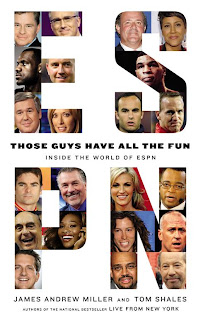 Well it's been a while since I blogged, but that's because I was working through the monstrous ESPN: These Guys Have all the Fun . If you are not familiar with this book, it's basically a massive biography about the total history of the ESPN corporation from it's inception in Connecticut in the late 70's through last week (no joke). Perhaps the most interesting part of the book is how it's told. Much like the previous collaboration between Miller and Shales, Live from New York (click here for that review), nearly the whole book is told through interviews. This can be both awesome and off -putting. For the most part it's very enjoyable and entertaining. The people speaking are very candid and their free opinions are very interesting. The only problem is that it goes on for 750 pages and can become a bit repetitive stylistically after a while.

Overall, the book is very good. It certainly has sections that are far more interesting than others but the details and insights about the background politics and the 'real' operation of a world wide corporation were illuminating. The beginning of the book was also great as I had no idea how ESPN truly started as a sort of 'mom and pop' operation trying to just show some local sports in the Northeast and growing into the behemoth that it is now.

Obviously, reading about the viewpoints of the various ESPN personalities is cool. More or less, everyone who has been or is on ESPN was interviewed. Some of the most interesting stories and opinions are about the TV people who caused the most controversy/issues. Keith Olbermann, for example, was famous for both his intellect and ego. Tony Kornheiser and Bill Simmons fall into a similar category.

There were some definite drawbacks that limited the book to 3.5 stars. Most significant is the fact that its soooooooooo long. Really, they needed a good editor. While I certainly get and appreciate that they are trying to be totally inclusive, there are many parts that I pretty much glossed over because it was like 10 interviews and 20 pages about the same idea/issue. I mean, I don't need to hear from 8 people from ESPN why getting the World Cup was such a big deal for the network.

The other annoying thing related to the length was their obsession with covering seemingly EVERYTHING. I mean the book was just released and it had things that were going on from like 2 months ago (i.e.30 for 30). They also seemed to feel the need to address and discuss every show (failed or otherwise) that was ever shown on ESPN and it's affiliated networks.

I would recommend this book to any sports fans however. It really is an awesome story, that is, for the most part, very well edited that gives you a real glimpse into the backroom of ESPN and all that they do. Some of the background on how things end up being on your TV is really cool. It's also a good read for anyone interested in hearing the business side of a billion dollar corporation. It makes you realize and appreciate how much decisions and items on TV are decided by people we don't even know.
Posted by droth8um at 4:25 PM