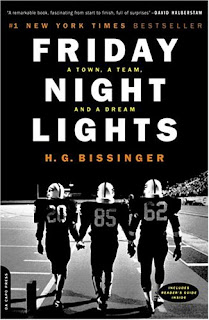 Well, this is a somewhat noteworthy blog. You see, it is my first book I have ever read on this new fangled device called a Kindle. On a side note, I enjoyed the Kindle, though, like many, I didn't think I would. It's so nice, easy, and simple, and as an added bonus, I have the Kindle app on my phone so I actually read much of this book on my phone...very cool.

Anyway, for those who don't know, Friday Night Lights is not just a movie and a TV show. In fact, most only know FNL from those two places, but well before the movie and show it was a pretty awesome book. As most already know, the story is about a year in the life in West Texas (Odeass specifically) and the story of high school football. I had been familiar with the movie and show (though I'm one of the few who apparently did not love the show).

Some things I learned:
1. They really, really, really love football in Texas. Like, to the point where people's priorities are significantly skewed in life (not to judge, but let's just say education is way, way behind football in importance).
2. The story took place in 1989...I had no idea it was this old.
3. The book is really a story about American culture and life. Sure, it's based around football but for much of the book I almost felt like I was reading an essay on sociology. This to me really was the most enjoyable part and interesting part of the book. Although I loved the football stories (it basically takes you through a whole season of a high school team) and biography's of the best players and coaches, the stories about life in Texas is what made this book great. Learning about the skewed priorities, the obsession with football in people's lives, the lack of time/interest put into education, the danger that is living in Odessa (one of highest murder rates in the country), and the waxing and waning of the economy based on oil prices.

So, you might be asking, how could this book get only 3.5 stars? It sounds awesome. Well, a few reasons. First, the author is a newspaper journalist and the books lacks some of the eloquence of prose that is usually found in other books that I read. It was told well, and straightforwardly, but it never really painted the great picture that you might hope in a book. Second, although I thoroughly enjoyed the non-football parts of the book, sometimes they would go on way too long. I'd be reading about a play in some big game, that flash forwarded to the stands, where the author than stars talking about some guy, and his life, and history, and some random stories about how his interest in football has affected his life. It just became a bit much after a while.

Overall, it was a very good story and a must read if you were into the FNL movie and TV show. For a casual sports/football fan, also a highly suggested read, but just be aware that you are getting a book about life in West Texas...and also, secondary to it, a book about football. Just be prepared that it occasionally drolls on, but it's still worth it, thanks to the great football stories.
Posted by droth8um at 2:41 PM